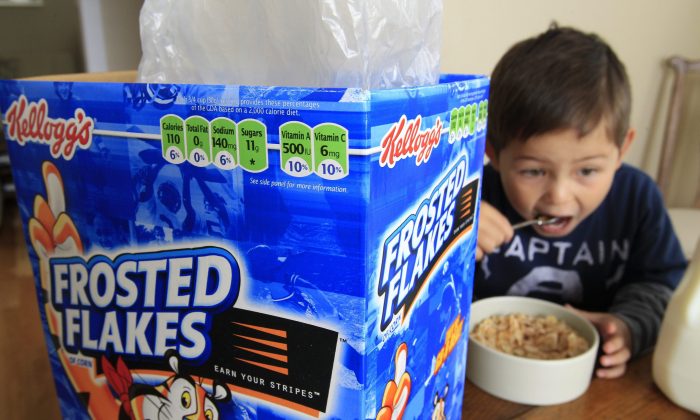 The Heart and Stroke Foundation is calling for the elimination of marketing of all food and beverage products to children and youth under age 17, saying that high-volume promotional tactics are setting up young people for obesity and lifelong health problems. (AP Photo/Paul Sakuma)
Canada

Online Ads for Foods, Drinks Aimed at Kids Should Be Nixed: Heart and Stroke

TORONTO—The Heart and Stroke Foundation is calling on the federal government to restrict online marketing of unhealthy foods and beverages aimed at children and teens, saying that high-volume promotional tactics are setting up young people for obesity and lifelong health problems.

The foundation is calling for the elimination of marketing of all food and beverage products to children and youth under age 17.

A study commissioned by the foundation determined that collectively children are exposed to 25 million food and beverage ads a year on their top 10 favourite websites, and more than 90 percent of products viewed by both kids and teens online are for products considered unhealthy because of high concentrations of sugar, fat, or sodium.

“I was very shocked by the numbers because they were so high,” study author Monique Potvin Kent, an assistant professor in the school of epidemiology, public health, and preventive medicine at the University of Ottawa, said of the exposure to web-based ads.

“But online, obviously there are no limits. They can just keep adding more ads,” said Potvin Kent, who reviewed food and beverage promotions on children’s and teens’ websites over a one-year period, assessing both the volume of ads and the nutritional quality of the products.

For children aged 2 to 11, the most frequently advertised categories were fast-food restaurants; cakes, cookies, and ice cream; and breakfast cereals.

For children aged 2 to 11, the most frequently advertised categories were fast-food restaurants; cakes, cookies, and ice cream; and breakfast cereals.

Kellogg’s Pop-Tarts took top spot for most ads for a single product on both children’s and teens’ favourite websites. Kellogg’s Corn Flakes and Red Bull Energy Drink made the top five of most frequently advertised products for both kids and adolescents aged 12 to 17.

The Heart and Stroke 2017 Report on the Health of Canadians, released Wednesday, Feb. 1, examined how unlimited food and beverage marketing targeting children and teens is affecting their food and beverage preferences and potentially their health.

In the last 35 years, the number of Canadian children with obesity has tripled, with almost one in three now defined as overweight or obese. Obesity puts children and adolescents at risk for a number of health problems, including heart disease, stroke, and diabetes, said foundation spokesman Dr. Tom Warshawski.

Warshawski, chair of the Childhood Obesity Foundation and co-chair of the Stop Marketing to Kids Coalition, calls the food and beverage industry’s marketing of unhealthy products to young people “unethical.”

“How can we defend the practice of persuading children and youth, who look to us for guidance, to consume food and beverages which we know will eventually cause them serious disease and perhaps even death?”

Blitzing kids with food ads online can also lead to family conflict, he said, with children nagging a parent in the grocery store to purchase foods or beverages they have seen digitally advertised.

“It’s easy for a parent to say no once or twice, but eventually kids wear you down,” he said. “And advertisers know this. They call it ‘pester power.'”

In an online poll commissioned by Heart and Stroke, 72 percent of 2,400 respondents agreed that marketing by the food and beverage industry gives it an unfair advantage over parents when it comes to influencing children’s eating and drinking habits.