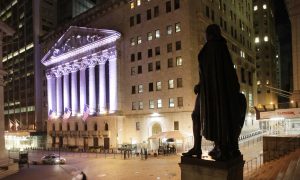 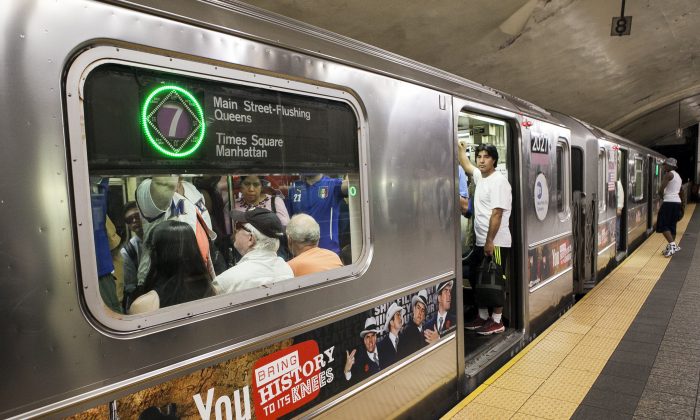 People wait on a 7 train that is being held at the Grand Central subway station on July 30, 2014. (Samira Bouaou/Epoch Times)
New York

Nightmare on the NYC Subway

NEW YORK—The subway car came to a halt but it was unlike any halt that Amy Strano had experienced. The train jolted. The lights shut off. A dim emergency light buzzed on. Then, Strano smelled smoke.

“It smelled like burning rubber,” said Strano, a products and services director for a New York nonprofit.

There was no announcement. The passengers on the No. 7 train glanced nervously at one another on the morning of April 6.

“My first instinct was that there was a fire and that I should move,” said 22-year-old Jacquelyn Trimlett.

A few passengers crossed over to other subway cars. But the riders did not know from which direction, or what, the smoke was seeping from.

The tension that Strano felt inside the broken train reminded her of Sept. 11. “I was around for 9/11,” she said. “I know the terrible things that can happen in this city.”

Finally, the train conductor announced that the Metropolitan Transportation Authority (MTA) was looking into the issue. The emergency breaks had self-activated and he was not sure why. Do not open the windows, Strano remembered him saying.

A passenger, who had opened a window minutes earlier, hurried to slam it shut.

A woman in a red sweater began to pray.

Strano was sitting next to a female, a stranger wearing office attire and tennis shoes. This stranger turned toward Strano and confided some troubling thoughts: She has a 5-month-old boy and she did not did not think her husband could sufficiently care for their son if she died. And the mortgage. What would happen to their mortgage if she died?

Strano, 38, has a 7-year-old daughter. She told the stranger she was wondering similar things, too.

Strano began to draft goodbye emails to her family and friends. But there was no cellphone signal. They were trapped in a tunnel under the East River.

“If I die, and my phone never makes it to the light of day, my emails won’t get sent,” Strano remembered thinking.

The train was not attacked by terrorists; instead, it was the working of a piece of machinery underneath the train called the contact shoe.

The contact shoe looks like a paint scraper, and it helps conduct electricity to power trains. But on that hapless morning the contact shoe touched something it was not supposed to touch. And this touch produced smoke. It also caused extensive damage to the back of the train.

MTA spokeswoman Amanda Kwan declined to give data on the frequency of contact shoe malfunctions. But “it happens often enough that we’re familiar with the issue,” Kwan said.

The MTA is still looking into what caused the contact shoe to fail, she said.

It’s just another one of these little things that will inevitably go wrong in a 100-year-old train system.

A contact shoe caused 540 people to get stuck on the No. 7 line for two hours that morning. One rider felt faint and needed emergency care.

In 2014, an F train derailed because of a broken metal plate underneath the track. One thousand riders were evacuated. No lives were lost.

MTA has been allocating funds toward big projects like the Fulton Mall in Downtown Manhattan and the No. 7 line’s Hudson Yards extension. But advocates are calling for more of a focus on repairs, a prioritizing the fixing of small problems before they turn into big problems.

Subway car breakdown rates worsened from an average of one mechanical failure every 172,700 miles, to one every 153,382 miles, according to the “Straphangers Campaign’s 2014 State of the Subways Report Card” that evaluated MTA service from December 2011 to December 2013.

But it is difficult to make repairs on a 24-hour train system. Not to mention,  MTA ridership has gone up 61 percent since 1992.

“We can only do so much, given our funding,” Kwan said of the MTA. “As long as we can get the funding to repair the system, we can prevent [such accidents] from happening.”

How could these equipment flaws happen when the MTA’s capital budget has allocated more than $20 billion for repairs and safety fixes in its 2014–2017 capital budget plan?

One reason is that the MTA runs the largest transit system in the country—the second largest in the world—spanning 5,000 square miles and 2,000 miles of track. And it’s a really old and a really broken system.

New York City has a subway system that once coexisted with horse buggies, and delis that sold jumbo malted milk for 5 cents a jug.

Today, it continues to operate in the age of self-driving cars and $9 kale smoothies. And the MTA is scrambling to catch up with the system’s failing parts while its trains transport 8.7 million daily passengers.

It is difficult to make repairs on a 24-hour train system.

From 1981 to 1982, its crumbling infrastructure caused one train to derail every 18 days.

Since then, the MTA has greatly increased its spending on repairs.

The MTA’s 2014–2017 capital budget is a $32 billion five-year plan that will maintain its trillion-dollar system. It includes funding for expansions like the Second Avenue subway project, major projects like Penn Station Access, new trains, new stations, and more service. However, $15.2 billion is still unfunded.

Meanwhile, Strano and the stranger next to her started sharing stories about raising children in New York City to keep themselves calm.

“I felt so scared and alone,” Strano said. “Her just being nice and talking to me about her son meant a lot. It was that human connection.”

They talked about children’s recommended hours of sleep. Strano laughed and assured the stranger that children will sleep more through the night as they get older and she will become more well rested.

The train broke down around 8:30 a.m. Riders said MTA workers arrived half an hour later to investigate the problem.

Trimlett, one of the trapped riders, watched them walk outside with their flashlights and radios. She felt relieved to see them arrive. But she began to worry as more workers arrived.

“I was starting to wonder how serious it actually was since they just kept on coming,” she said.

They continued to wait.

At 9:20 a.m.—nearly an hour after the train broke down—another announcement came on. The conductor said they had figured out what caused the train to break down. A rescue train was on its way to evacuate them, but he was not sure when it would arrive.

Contact shoe malfunctions are usually not a big deal because rescue trains come faster. But there is no average response time. It all depends on how close the rescue train is, and the feasibility of clearing tracks. In the case of the No. 7 train that morning, the rescue train was far.

The rescue train arrived at 10 a.m. Firemen carrying axes and police officers stood by the doors of both cars as passengers crossed from the front of the broken train into the back of the rescue train.

For most of the people waiting in other stations along the No. 7 line, the nightmare was not over.

But that was too late for Simon Cousins, CEO of Allegravita LLC, who missed an important business meeting scheduled for 10 a.m.

“It destroyed my day,” Cousins said. “We had a major pitch to a big client at 10 a.m. We were unable to meet our business needs.”

When Strano got off the train, all her goodbye emails automatically sent. She had to send everyone a follow up email explaining that she was still alive.

As she stepped on to a No. 6 train for the next leg of the journey, an announcement came on that there was going to be a wait.

“At that point I said I have to get out!” she said.

She left the station and walked from Brooklyn Bridge to the office of her nonprofit on Wall Street.