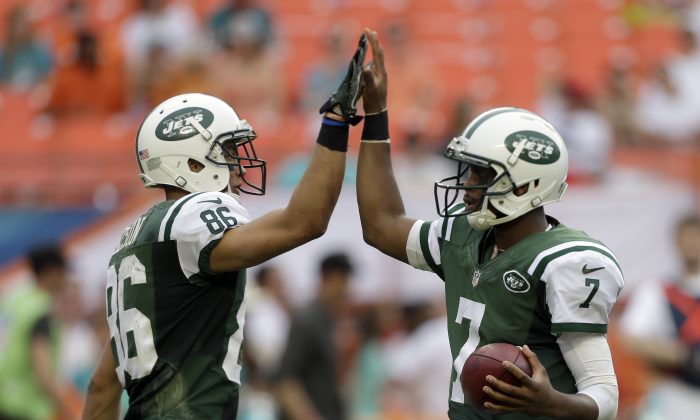 It’s been a long three-plus years since Rex Ryan’s crew has made the playoffs. During that time, Johnny Manziel has gone from unknown to Heisman hero to party animal to first-round draft pick (where the Jets passed on him, despite this writer’s plea) and then back to party animal again. Yet the Jets keep missing the playoffs. Can they reverse the trend this season?

Although this writer wasn’t too thrilled with last season’s “Geno Smith draft,” second-year GM John Idzik has, admittedly, made some significant strides in upgrading the overall talent of the roster, while holding onto some precious cap space. As I see it, there are three keys to the Jets season this year:

1. The development of Dee Milliner

The Jets parted ways with Antonio Cromartie, who looked like he had lost a step, this past offseason in the hopes that second-year corner Dee Milliner was ready to be the team’s top corner in 2014. Early last season, Milliner looked like a bust before rebounding to win the NFL’s defensive rookie of the month award for December. During that month the corner from Alabama collected 27 tackles, picked off 3 passes, and had 13 passes defended. He was even named the AFC’s defensive player of the week after picking off a pair of passes in the finale against Miami.

In addition, if Rex Ryan is thinking of starting third-round pick Dexter McDougle at the other corner at some point this season, he’ll need to make sure the other side of the field is well covered. Let’s hope it is.

2. The offensive impact of Chris Johnson and Eric Decker.

After joining an offense in dire need of playmakers, Decker and Johnson immediately become options 1A and 1B for offensive coordinator Marty Mornhinweg.

But both come with major question marks.

First off, it’s been five years since Johnson ran for 2,006 yards—the sixth-best single-season total of all time. He averaged 5.6 yards per carry during that incredible season. Last season that average plummeted to just 3.9 per carry and Johnson even made headlines at the start of camp just by being able to fully practice after offseason surgery to repair a torn meniscus in his right knee.

Secondly, how is Decker going to fare in going from catching balls from the greatest quarterback of all-time, Peyton Manning, to Jets Geno Smith—the worst-rated quarterback of 2013? To say he’s going take a step back from the 87 catches, 1,288 receiving yards, and 12 TDs is probably a good bet. At the same time, he won’t have to worry about the Jets not making him the focal point of their passing game, unlike in Denver where the Broncos were loaded.

The quarterback situation—only the most important position on the field—has been quite a problem in the Rex Ryan era and to say that this writer was extremely disappointed that the Jets actually had an opportunity and yet passed on the Heisman Trophy winner/party animal Johnny Manziel in the 2014 draft is an understatement.

Given that the Jets had already signed Michael Vick as the backup and already taken Geno in the second round last year, and had plenty of other holes to fill, it wasn’t that surprising to see, and maybe it’ll prove to be the correct call. Still, a good quarterback can mask a lot of other problems.

In all fairness to Geno, you can’t succeed if you’re not even given the opportunity, and if all quarterbacks were judged on their rookie seasons alone even Peyton Manning, and his league-worst 28 picks in 1998, would have had trouble justifying being a starter his sophomore year.

If the quarterback situation is going to work this season though, Ryan is going to have to approach it differently than he did the Mark Sanchez situation, when he held onto Sanchez as the struggling starter for far too long—like four years. With Vick as the talented yet injury-prone backup that seems an unlikely scenario, but we’re not sure with the defensive-minded Ryan.

Vick has more talent than any backup during Ryan’s previous five seasons and should Geno Smith still be the Geno Smith of 2013 next season, Ryan will need to act fast.