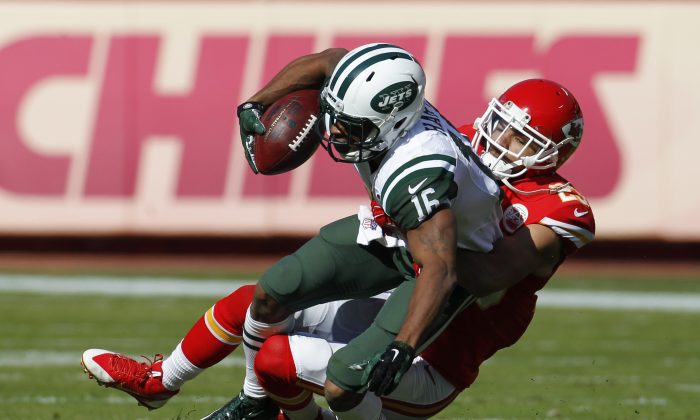 On the Ball: Steelers Visiting Jets at Wrong Time for Gang Green

It’s been a season to forget for Rex Ryan (and all of us unfortunate Jets fans), but there are still seven games to go until Ryan and the Jets can mercifully turn the calendar to 2015 and the upcoming draft.

You can look at that two ways, though. With a strong push, the Jets can end the season with a not-so-awful 7–9 or even 8–8 record (probably not realistic, based on everything I’ve seen). Or they continue their downward spiral that was predestined with the drafting of Geno Smith, the accumulation of injuries in the secondary, and the uneven play of the offensive line, and take Jameis Winston with the first pick in the draft next spring.

I’m going with the latter.

This week’s matchup with Pittsburgh, in particular, looks like a train wreck waiting to happen. Let’s examine:

Roethlisberger just recently set an NFL record with 12 TD passes over a two-game span. I’m guessing he’s salivating at the prospect of continuing his streak against the team that has the rare ability to turn any opposing quarterback into Steve Young.

Overall, Roethlisberger is third in the NFL with a 110.6 QB rating and in TD passes with 22, and second in yards passing at 2,720—numbers Jets fans can only dream of.

Big Ben’s favorite target is Antonio Brown who leads the NFL in catches (71), targets (103), and receiving yards (996), and is fourth in TDs caught with 8. To put that in perspective, Brown has more yards through the air than the Jets’ top three receivers (Eric Decker, Jace Amaro, and Jeremy Kerley) combined.

2. The Jets pass defense is not.

This is pretty sad to write, given how good of a defensive coach Rex Ryan is. (Unfortunately for Rex, defense is the only thing he knows.) It just goes to show how thin, inexperienced, and untalented they are in the secondary.

This certainly isn’t news to anyone who’s had the misfortune of following them this season. The Jets have allowed their opponents a league-worst QB rating of 112.8—the same record-setting rating Steve Young put up in 1994, which was broken in 2004 by Peyton Manning.

The Jets have also allowed a league-high 24 TD passes and have recorded just one interception—another league-worst. In other words, there’s no doubt who has the worst pass defense.

3. The offense still isn’t great, even with Vick at quarterback.

With Vick starting against the Chiefs over Geno Smith, the Jets still only scored 10 points, though it was hard to fault Vick. The four-time Pro Bowler went 21/28 passing for 196 yards, 1 TD, and no interceptions.

Let’s forget our passing game for this one. The Jets do have a chance in running the ball against the Steelers.

Lost in the dark cloud that this season has become is a decent running game by “Gang Green” that’s fifth in the league in yards per attempt (4.7) and third in yards per game at 139.9. Conversely, the Steelers defense is 25th in yards per carry at 4.4.

If the Jets are going to have a chance, they need some long, run-oriented drives to hold on to the ball as long as possible to keep Roethlisberger and company off the field, in the hopes of messing up their timing. Short drives will be the end of them, and possibly Ryan.