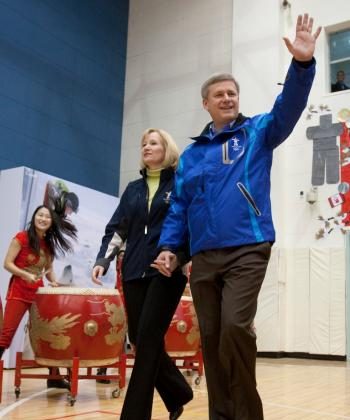 Prime Minister Stephen Harper and his wife, Laureen, visit with students at the Canadian International School of Beijing. (PMO photo by Jill Propp)
US

On Harper and China: What Exactly Is Wrong With Raising Human Rights?

Matthew Little
Matthew Little is a multi-media reporter for The Epoch Times.
View profile
Follow
biggersmaller
Print
OTTAWA—Chinese leader Wen Jiabao's public scolding of the Canadian prime minister this week was a rarely seen diplomatic breach. But it was the reaction from some Canadian media and opposition politicians that has irked Chinese rights defenders, as well as a source in the prime minister's office who spoke with The Epoch Times.

The admonition is now famous. At an official welcoming for the Canadian leader in Beijing on Thursday, Wen introduced Stephen Harper by saying he had waited too long to come to China and that he deserved the reams of criticism he'd received in the Chinese state-run press for his apparent neglect.

Within hours, some Canadian pundits and opposition politicians lined up to blame the prime minister for the incident, and for having upset the Chinese rulers by raising human rights concerns publicly since taking office in 2006.

"I think that does Canada no good and does not reinforce our relationship with China when you kowtow to China and don't back your prime minister up,” says Cheuk Kwan, chair of the Toronto Association for Democracy in China.

Kwan believes the criticisms had less to do with perceived faults in Mr. Harper's policy and more with opportunism.

“Obviously those with commercial interests have their own special agenda; they would rather we do not talk at all about human rights and just concentrate on trade. Our [opposition] politicians of course are making partisan attacks on Harper without any basis on our national interest. So I am very concerned about the fact that we seem to be kowtowing too much to China.”

Mr. Harper's government was seen as having cooled relations with the Chinese regime when it raised concerns publicly about the regime's human rights abuses in 2006, including the case of Huseyin Celil, a Canadian citizen imprisoned in China on charges that human rights groups say are suspect.

A source in the Prime Minister's Office who spoke with The Epoch Times Friday evening railed against the criticisms from those opposition politicians who called Mr. Harper among other things “ignorant” for his approach to China.

The source went on to say that the opposition was politicizing the issue.