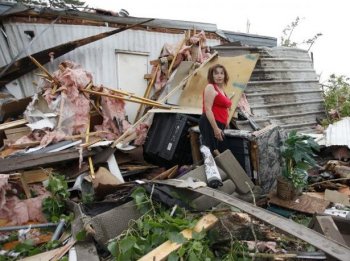 Linda King, 61, stands in the debris of the trailer home she had not yet finished moving into in Slaughterville, Oklahoma, after the Oklahoma tornado. (Brett Deering/Getty Images)
US

By Nicholas Zifcak
Print
An Oklahoma tornado and severe weather has caused Gov. Brad Henry to declare a state of emergency on Monday. Six people have been killed and more than 57 injured.

The tornadoes struck central and northeastern Oklahoma Monday in a 49-square-mile area of damage, leaving dozens of homes and businesses damaged or destroyed. The Oklahoma Department of Emergency Management officials are in the midst of assessing the damage.

Gov. Henry took an aerial tour of the hardest hit areas in central Oklahoma and visited with emergency workers on the ground Tuesday. He took the first step in seeking federal assistance when he declared a state of emergency.

“Lives and property have been lost, and our thoughts and prayers go out to those who are suffering because of these storms,” Gov. Henry said in a statement released by his office. “We are ready to do whatever it takes to help victims of these storms rebuild and recover.”

The National Weather Service had predicted the severe weather system, saying the atmosphere had the right mix of winds, heat, and moisture. The storm put down tornadoes in Oklahoma and Kansas, and dumped softball and tennis ball-sized hail across its path.

Three storms touched down just west of Oklahoma City, causing damage as they moved across the area. The Oklahoma City area is home to 1.2 million people.

“We've had a very strange event: multiple tornado portions with this event as it came through,” said David Barnes, the emergency management director for Oklahoma County, reported Tulsa Oklahoma broadcaster The News on 6. “We have multiple vehicles overturned. A housing addition has had multiple homes destroyed.”

Oklahoma Gas and Electric reported that about 35,000 customers were without power on Monday night. By Tuesday morning, the number reduced to 15,000. The company serves more than 779,000 customers in Oklahoma and western Arkansas.