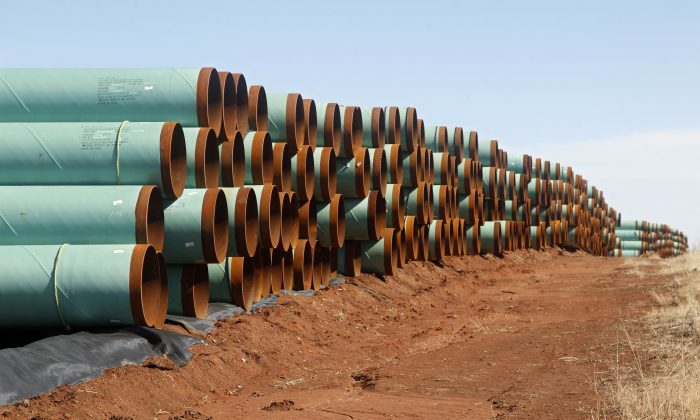 Canada’s oil wealth offers an unpredictable paycheque that needs to be carefully managed even if it isn’t the curse some would suggest.

That’s the cautionary conclusion of Alan Gelb, a highly regarded economist at the Washington, D.C.-based Center for Global Development. Gelb came to Ottawa Tuesday to share the findings of his report “Should Canada Worry About a Resource Curse?”

The good news is Canada’s well-rounded economy, capable government, and educated workforce means oil is, on the whole, a benefit to the national economy.

There is also bad news, which is that this benefit is being poorly managed, especially in Alberta where the provincial government is running deficits in the midst of an “unparalleled resource boom.”

“That is not a healthy situation,” said Gelb.

Even worse, managing resource wealth poorly can increase infrastructure costs and lead to waste when budgets need to be cut during lean times.

“For a country like Canada, all the evidence is the benefits outweigh the costs, but there’s no room to be complacent,” he said.

On a per capita basis, Canada is richer in resources than most countries, but has managed to build infrastructure, factories, institutions, and develop its human capital in the form of an educated workforce, to the point where resource wealth is only seven percent of the national wealth, unlike up to 60 percent in some other resource rich countries.

But resources can be a curse for countries at “the bottom of the barrel” in terms of their rank on the human development index. Countries like Chad and the Congo will do worse after a major resource discovery, said Gelb.

He noted the example of Ghana which saw an overall economic loss due to agricultural decline in an area where a mine started.

Resource wealth can be siphoned off in those countries by incumbent political interests, or lead to political tensions to control those resources.

Plan for Bust in Times of Boom

Rich or poor though, all resource countries must deal with market volatility, and predicting oil prices is a mug’s game. Analysts have been unable to accurately predict past booms and busts, and are unlikely to improve in the future, said Gelb.

“The result is there is a huge amount of uncertainty out there,” he said.

That means policy makers and investors need to take a cautious approach and avoid common pitfalls of resource booms. Few manage to do that. Countries are virtually always overly optimistic and the vast majority, including Canada, fail to plan for downturns, said Gelb.

Instead, governments repeatedly spend resource dollars even before they’ve been collected, creating fiscal obligations that put them on poor footing for leaner times.

“It isn’t very smart to run fiscal deficits on the upswing of a cycle, and Alberta has been doing that. Typically when countries have done this, it usually has been a very bad signal,” he said.

Gelb said countries need “counter cyclical fiscal policies” that will allow them to deal with the booms and busts without causing major upheavals in the economy.

Chile, which is rich in copper, is one of the few countries with fiscal policies that effectively manage that cycle.

“So there are ways of doing it, but the issue is, politically, how do you get commitment to such a system and how do you sustain through successive governments. That is the normal problem.”

It can prove more difficult in a country like Canada where provinces have jurisdiction of natural resources.

Instead, both federal and provincial governments spend during boom times, which causes costs to rise, and cut in lean times, when inputs are more needed.

Canada’s oil sector is particularly vulnerable to booms and busts because Canada is a “high cost producer.” While some countries like Saudi Arabia can produce oil for $4 a barrel, in Canada that cost rises to between $30 and $60. That means Canada’s oil sector has leaner profit margins and can’t absorb major declines in prices.

“I would say that it’s very important if you are a high cost producer to be cautious.”

In Canada’s case, a fall in oil prices looks all but certain thanks to major reserves set to come online in the United States, turning our largest importer into a potential exporter.

And while Gelb acknowledges that exchange rates rise and fall with resource prices, he falls short of suggesting Canada suffers Dutch Disease—the phenomena of a country losing higher value manufacturing when their dollar rises, making those goods too expensive for other countries to import.

The U.S. suffered a collapse in manufacturing much like Canada’s—despite a dramatically different economy—but managed to continue improving overall productivity despite job losses. In other words, the manufacturing sector made more goods with less people.

“Low skill, low productivity jobs have been rubbed off the map,” explains Gelb.

There are other problems that can sneak up on countries cashing in on oil reserves, including regulatory risks. That’s an issue Canada is facing now as it tries to secure pipelines to export oil sands crude. Both the Keystone XL and Northern Gateway pipelines face delays due to environmental concerns in the U.S. and Canada.

Environmental regulations could leave some resources stranded, unable to be developed. “I think this is actually quite a large risk,” said Gelb.

Gelb points to Germany where large coal reserves apparently vanished. In reality, they simply became unfeasible because the government moved the country away from coal energy. A similar scenario isn’t entirely inconceivable with some oil reserves—particularly Alberta’ carbon-intensive oil sands which have attracted international protest.

But while Canada’s difficulty building pipelines has been vexing for the government, it could work out in the long run, suggest Gelb.

He said the additional due diligence counters the push by interests intent on development who may not have looked closely enough at long-term demand and future regulations.

One unexpected proponent of slowing oil sands development is former Tory MP for Fort McMurray-Athabasca Brian Jean. Jean resigned as MP for the region on January 10, and has since suggested he might seek office provincially to address issues facing the area.

While the NDP have sent out a tongue-in-cheek missive which pretends to be a government statement admonishing Jean’s position as “an insult to all hard-working Albertans,” Gelb suggested a slowdown may be prudent.

A rapid ramp up in resource development increases the strain on infrastructure and the cost to expand it. With production costs upwards of $30 a barrel, that means significant labour is being invested, and population shifts are costly to accommodate, requiring everything from roads to schools.

“The problem with doing it very fast is that usually you end up raising costs. It is much more costly to do it quickly,” said Gelb.

“If you are borrowing money to do it, you are sort of mortgaging your future,” he said.

Jean told the Globe and Mail that the oil sands boom is hurting the quality of life in the area and needs to be slowed so infrastructure can catch up.

“You’ve got two-hour waits in the morning to go 30 kilometres. Build a new highway. How about a bigger hospital? I feel sometimes like we’re racing to the end. [The oil] is not going anywhere. The oil sands is there. Let’s manage it properly.”

It’s a position Gelb would agree with.