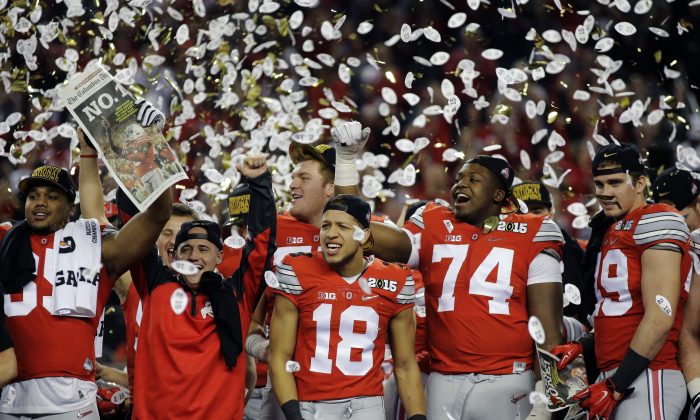 The Ohio State Buckeyes won the college football national championship on Monday night, and fans are celebrating–but perhaps a little too hard.

As in many similar cases, it appears that riots have started in Columbus and possibly other parts of Ohio. The action seemed to start with students trying to access Ohio Stadium. Large groups of students were turned away, though, by police.

Jeremy Pelzer of the Northeast Ohio Media Group reported that tear gas forced most of the crowd from High Street and in front of the Ohio Union. “SWAT team is warning people to clear the street or they’ll be gassed,” he said.

Dawn Kendrick of WKYC said that police were using “massive amounts of pepper spray” on High Street. “Traffic at a standstill. Walking AWAY. Can’t breathe,” she said via Twitter.

The students were chanting “O-H” and then “I-O.”

Many people were criticizing the students on Twitter. “Burn down your entire campus!!! #Riot !!! Keep it classy #OhioState and #Columbus !!!” said one. “The game hasn’t even been over a hour yet. Act like you’ve won before ohio state students. BTW who’s Maryland going to riot now without duke,” said another.

But students appeared to be having fun, regardless of the chaos.

“Riots on campus, couldn’t be a better way to celebrate this fantastic day for Ohio,” said another.