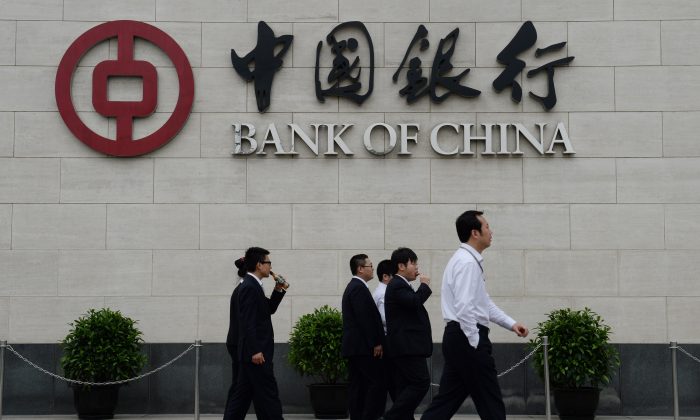 Bank workers walk outside the headquarters of the Bank of China in the Xidan District of Beijing on May 8, 2013. The state-owned Bank of China was accused of money laundering by Party mouthpiece Chinese Central Television on July 9. (Mark Ralston/AFP/Getty Images)
China

A public fight has erupted in China between two major state institutions: China Central Television (CCTV), the official mouthpiece of the Communist Party, and the Bank of China, a state-run bank and one of China’s largest. Spats of this nature are highly unusual in China, and may indicate political tensions between the scenes.

CCTV reported on July 9 that the bank had been a major player in a money laundering racket, helping Chinese to move vast quantities of cash outside the country, in violation of China’s capital mobility laws.

Bank of China Limited is one of the four big state-owned commercial banks; founded in 1912, it is the oldest bank in China. It refuted outright CCTV’s accusations that it engages in “money laundering,” “embezzlement,” and “underground banking.”

Regulators appeared to be caught unawares. Zhou Xiaochuan, head of the People’s Bank of China, China’s reserve bank, simply told the media: “This just happened yesterday, it hasn’t been long. We need more time to clarify this incident, so I can’t answer questions today.”

CCTV’s 21-minute report, done in its typical undercover style, showed how the bank would work with migration brokers, fake client income documents, and move vast amounts of money overseas. The bank would take a cut of the money moved.

The “service” offered by the bank is called “Youhuitong,” a cross-border settlement business for the renminbi, China’s currency. It uses the overseas branches of Chinese banks to make the transfer, skirting around the State Administration of Foreign Exchange, which theoretically limits Chinese citizens from taking more than US$50,000 out of the country every year, according to current laws.

A client manager at Bank of China, who did not know he was being recorded, is seen telling an undercover CCTV reporter posing as a client that the transaction is in a “gray zone.” The CCTV narrator then solemnly quotes an expert, informing the viewer that it is definitely illegal.

Bank of China was a proactive partner in the scheme, the report said, helping clients fabricate documents for funds whose origins they could not otherwise demonstrate. The bank would go so far as to Photoshop company contracts, the report said.

“No matter how illegal your money is, our bank is able to launder it for you and transfer it out of China safely,” a bank employee boasted to the CCTV reporter, not knowing they were being recorded.

Bank of China’s little scheme caused severe capital flight, including by Party officials who transferred their ill-gotten wealth overseas, the report said. Just one bank branch in Guangzhou City of southern China’s Guangdong Province transferred 6 billion yuan ($967 million) over a year through the Youhuitong system—just the fifth highest that year, the report said.

Bank of China’s response was swift and decisive: it said that its Youhuitong service was part of a legal pilot scheme launched in 2011, with appropriate government supervision. The China Central Television report, meanwhile, “deviated from the facts” and showed a “biased understanding” of Youhuitong.

Whether it was a shady scheme or not, the Bank of China does not appear to be the only bank doing it. Industry sources told the Hong Kong-based South China Morning Post that China Citic Bank—controlled by the Citic Group, which in turn falls under the direct supervision of the State Council, China’s cabinet—has also facilitated the transfer of currency overseas for wealthy Chinese clients.

“Both Bank of China and Citic Bank have been able to do this business only after they got approval from the Guangzhou branch of the People’s Bank of China,” the source said.

Many observers of the contretemps were intrigued at the fact that a Party mouthpiece, CCTV, publicly attacked another arm of the state—a major bank. The investigative report included unannounced visits to multiple bank branches, secret shooting with pinhole cameras, and reporters who posed as wealthy clients wanting to move large amounts of cash.

“This is definitely not the autonomous behavior of a media company—that’s without a doubt. There must be someone directing this, part of a power struggle,” said Wang Sixiang, a Chinese economic scholar and historian, in an interview with the New York-based New Tang Dynasty Television.

“It looks like an excuse to go after someone, rather than being about combatting money laundering,” said Wang.