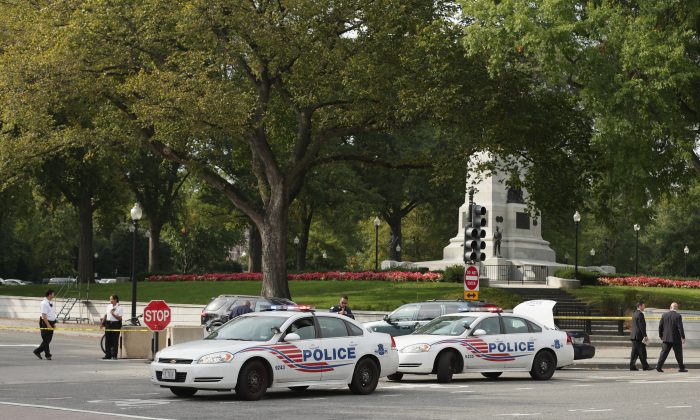 A Metropolitan Police Department officer was shot while sitting in a car in Baltimore. [FILE PHOTO] (Chip Somodevilla/Getty Images)
US News

An early morning shooting has taken the life of an off-duty Washington, D.C., police officer.

Sgt. Tony Mason of the Metropolitan Police Department in Washington was shot to death at about 12:45 a.m. on Saturday, Nov. 4 while sitting in a parked car.

We regret to inform that @DCPoliceUnion member Sgt Tony Mason was shot and killed early this morning in West Baltimore. EOW 11-4-17. pic.twitter.com/KFDo2ZAojX

As far as investigators can tell, Mason and an unnamed female companion were parked on the 2800 block of Elgin Avenue in Baltimore when an unidentified person approached the vehicle from behind and opened fire.

Eastern District Shooting Investigation On November 4, 2017, at approximately 12:30am, officers were called to the…

The suspect then fled the scene.

Mason was taken to the hospital where he died of gunshot wounds. His companion was treated for a gunshot wound to the leg.

Mason, 40, had been with the Metropolitan Police for 17 years. He was an undercover officer with the Vice office in the sixth district. He reportedly lived in Baltimore and commuted to D.C.

Mason had served as a police officer in the U.S. Army for five years.

His companion, 43, is expected to survive.

Mason’s murder happened just 26 hours after a community organizer tried for the second time to convince citizens to stop shooting each other for 72 hours.

Local activist Erricka Bridgeford created the organization Baltimore Ceasefire and helped organize events and activities throughout the city in an effort to call for peace.

Bridgeford called on the city to observe a weekend without gun violence to mark the 300th murder in 2017, which occurred on Friday, Nov.3.

Bridgeford had tried to call a citywide cease-fire in August 2017. That attempt was ended by a pair of murders.

Bridgeford said Baltimore Ceasefire will travel to the site of Mason’s murder to pay respects.