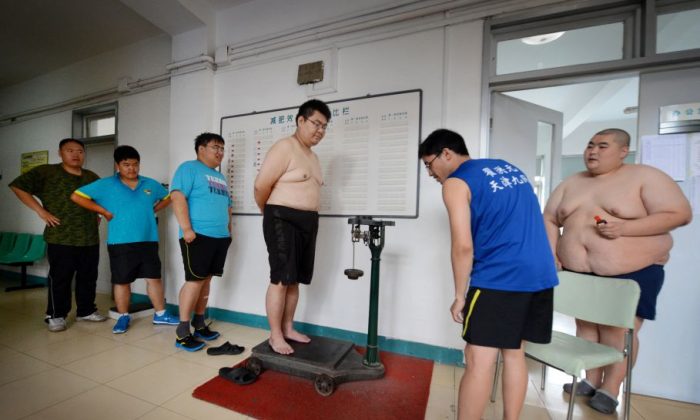 Overweight people checking their weights after their acupuncture and exercise treatment at the Aimin (Love the People) Fat Reduction Hospital in the northern port city of Tianjin, China, June 14, 2012. (Mark Ralston/AFP/Getty Images)
Opinion

Obesity in China, particularly in children, has become an important health concern that will seriously affect the health of future generations. It will also place a heavy economic burden on the country.

In addition, making the situation even more serious, China, as well as Vietnam, India, and many other developing countries, has to shoulder a “double burden:” the persistence of undernutrition, particularly among children in rural areas, and a rapid rise in overweight, obesity, and related diseases, such as cardiovascular disease, hypertension, stroke, Type 2 diabetes, and certain forms of cancer.

“What we are seeing in developing countries undergoing rapid economic transition is undernutrition, overnutrition, and infectious and chronic diseases coexisting over long periods of time,” stated Gina Kennedy, from the Food and Agriculture Organization (FAO).

Although the terms “obese” and “overweight” are sometimes used interchangeably, they have different meanings. Overweight is having a weight closer to normal than obese, and the difference between both terms is determined by using the body mass index (BMI), which is a way of determining the amount of body fat based on a person’s weight and height.

In Chinese cities, according to official statistics, 8 percent of children 10 to 12 years old are considered obese and an additional 15 percent are overweight. A University of Southern California study carried out in 2006 found that the average body fat of Hong Kong children was 21 percent, an extremely high number.

There are several reasons to explain the increase in obesity in China. Traditionally, the Chinese diet included mainly grains and vegetables, with few animal foods. As a result, the fat and sugar intake of the Chinese population remained low for a long time. However, as the country experienced explosive economic development, fatty and sugary foods became much more widely available.

Due to the lack of knowledge in the general population of what constitutes proper nutrition, and about the harmful effects of fatty and sugary foods, their consumption has increased significantly in the last few decades, and so did the problems associated with it. Because of past famines in the country, different foods, but particularly high fat foods, are now seen as very attractive items. At the same time, consumption of grains, fruits, and vegetables has decreased.

Eating in fast food places, particularly American franchises of chains such as McDonald’s, Pizza Hut, or Starbucks, where food is particularly high in fats and sugar, is becoming very attractive and is considered a status symbol. Although food in those places is expensive by Chinese standards, they offer an atmosphere of relaxation and luxury that attracts many Chinese, particularly young business people.

Attraction to fast foods is not going to disappear. Instead, a new trend is developing regarding these places. It started in Hong Kong, where McDonald’s restaurants offer what has been called “McWeddings” where they provide wedding receptions for young couples. McDonalds will open a total of 250 new restaurants this year and expects to have 2,000 restaurants across China by the end of 2013. China’s fast-food industry is now the fifth largest in the world.

Another important factor in the increase of obesity levels in the general population is inadequate physical activity levels as a result of increased use of TV, computers, and passive leisure activities; lack of safe and adequate spaces for physical exercise; and increased use of motorized modes of transportation, among other factors. Cars have become not only symbols of wealth, but have led to drastically lower levels of physical activity.

To confront this problem that has so many serious implications, it is necessary to increase programs in schools aimed at cultivating healthy eating practices and teaching healthy lifestyles in children. It is also important to increase nationwide social and health programs on public nutrition through the mass media and the creation of community-based nutritional education programs.

Several countries have been experimenting with the use of fiscal measures to limit the consumption of foods high in fat, sugar, and salt. Higher taxes on unhealthy foods can help improve health by changing eating habits, while at the same time generating important revenues that can be used for prevention efforts. The challenge for policymakers is how to develop effective programs and policies aimed at preventing and controlling what is fast becoming a serious public health problem, while at the same time allowing the population to enjoy the benefits of the country’s economic growth.

Dr. César Chelala is an international public health consultant for several U.N. agencies and international organizations. He is also a winner of an Overseas Press Club of America Award.