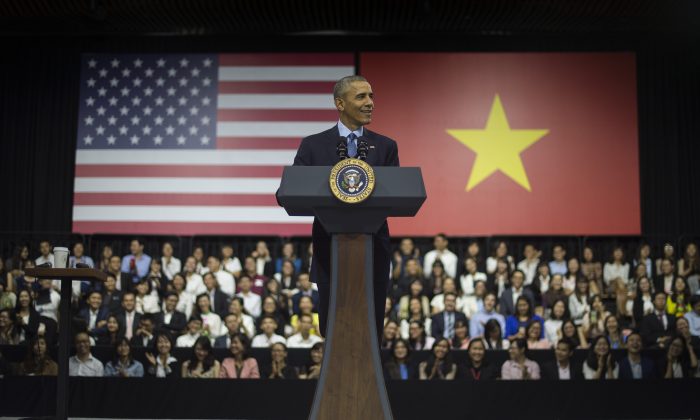 Celebrity chef Anthony Bourdain recently posted on his social media accounts photographs of himself and President Barack Obama tucking into bowls of pho noodles, grilled pork, and cold beer in a restaurant in Vietnam.

But Chinese citizens are still not quite convinced that the casual dinner session was authentic.

Obama had arrived in Vietnam on May 22 as part of a week-long diplomatic trip in Asia. Japan is Obama’s final stop on the trip, and he is set to make history as the first U.S. president to visit Hiroshima, the city that America dropped an atomic bomb on in 1945 near the end of the Second World War.

Obama’s simple dinner with Bourdain at the Hanoi restaurant Bún chả Hương Liên had been arranged beforehand, and the conversation between the two would be shown in September on Bourdain’s CNN show, “Parts Unknown.”

About 500 people had gathered outside the restaurant to catch a glimpse of Obama, according to Vietnamese newspaper VnExpress. When the president left the restaurant, he shook hands with enthusiastic locals as they snapped photos of him on their cellphones.

It is unclear if mainland Chinese citizens were aware that the meeting between Obama and Bourdain was for a TV show. But many caught on that it was definitely staged, and they took to Sina Weibo, the popular Chinese microblogging site, to debunk the photos that were circulating on the internet.

“Best picture: The food on the other tables are exactly the same as what Obama ordered,” “Cheng Pengfei OH” from Hubei Province wrote.

“colonization” wrote: “If Obama was sitting right next to you, would still be eating so calmly?”

“Aiyayayayayaai” from Hubei Province speculated: “People in the vicinity are in fact agents of Asian descent—the CIA wouldn’t dare sit Obama that close to regular Vietnamese.”

Other netizens drew comparisons between Chinese officials and the U.S. President at the comment section of Chinese news portal NetEase.

In the comment section of Chinese news portal NetEase, “setsu” from Zhejiang Province wrote: “[Obama] doesn’t act like a president. He should have a $1,000 dollar. A county official in China eats much better food.”

A netizen from Hunan Province wrote: “A township chief dines extravagantly, while you are having street food. If you don’t go to a hotel to have a meal, how can you establish your official prestige?”

It is unknown if any of these netizens who questioned the authenticity of the incident were part of China’s 50 cent army—paid commentators that spam the internet with posts aimed at painting the Chinese regime in a favorable light.

This is not the first time that Chinese netizens have closely scrutinized Obama’s public gestures. During Obama‘s March visit to Cuba, many Chinese netizens expressed shock that Obama had held his own umbrella to shelter First Lady Michelle Obama from rain.