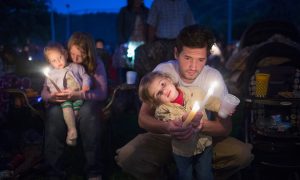 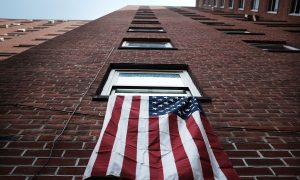 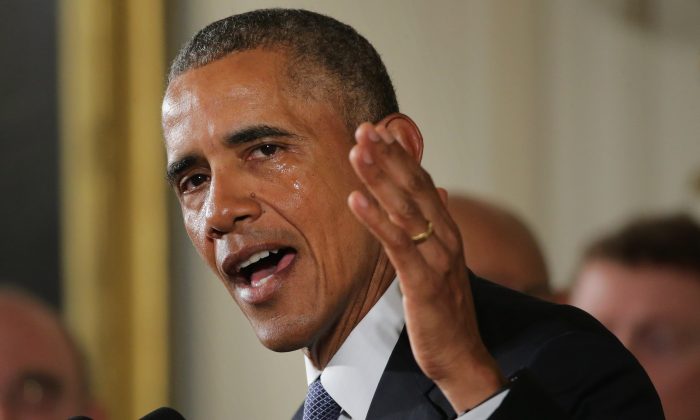 With tears running down his cheeks, President Barack Obama talks about the victims of the 2012 Sandy Hook Elementary School shooting and about his efforts to increase federal gun control in the East Room of the White House in Washington, D.C., on Jan. 5, 2016. Without approval from Congress, Obama is sidestepping the legislative process with executive actions to expand background checks for some firearm purchases and step up federal enforcement of existing gun laws. (Chip Somodevilla/Getty Images)
Opinion

It’s common in the United States to refer to a second-term president in his final year as a “lame duck,” his time limited, his momentum gone, and his political capital ebbing away to whoever’s next in line for the White House. But, not for the first time, Barack Obama has surprised and confounded his critics.

Deeply frustrated by the failure of his package of “sensible gun controls” to secure enough votes in the Senate back in April 2013, he has now announced a series of executive control measures as a way of delivering on key gun control commitments, re-energizing the debate, and doing so in a way that may favor the Democratic cause in a presidential election year.

This parallel approach of controlling criminal access to firearms while protecting law-abiding and responsible gun ownership is hardly a new idea.

More to the point, the leading Democrat in the presidential race, Hillary Clinton, has already advanced proposals to regulate the huge “secondary market” in firearms—the so-called “gun show loophole,” whereby existing gun owners can, without any oversight or regulation, privately sell firearms to anyone willing to affirm they are not disbarred from gun ownership—in line with existing second amendment gun rights. Predictably, Republican frontrunner Donald Trump has vowed, if elected, to “unsign” Obama’s order.

The difference this time, however, is that Democrats, so used to avoiding the gun control question fearing a disaster at the polls, have found an issue they feel safer with. There is undoubtedly evidence to suggest they may have judged it right this time and that gun control might not be the electoral third rail they had once feared.

Even in 2013, as senators were voting down the package of measures put forward by Obama, measures drawn up by some of the world’s leading gun violence researchers, polling evidence suggested that as many as 90 percent of Americans—including majorities of Republicans and card-carrying members of the National Rifle Association (NRA)—supported expanded firearm purchase background checks. Now, support for such measures has hovered consistently around the 80 percent mark.

But as the polling organizations (Pew, Gallup, and the General Social Survey) know, and the Democrats have had cause to regret, it matters absolutely how the gun control question is phrased, and voters have a worrying habit of saying one thing to pollsters and behaving differently in the privacy of the voting booth. A poll by Pew, just over a year ago, appeared to show that pro-gun and pro-control support had flipped over, with a narrow majority now more concerned to protect gun rights.

But this parallel approach of controlling criminal access to firearms while protecting law-abiding and responsible gun ownership is hardly a new idea.

In his excellent analysis of recent Supreme Court rulings on gun rights, Adam Winkler shrewdly notes: “Americans have always had both gun rights and gun control.” More surprisingly still, Obama himself is not so far away from that view. “Don’t tell me we can’t uphold the Second Amendment while keeping AK-47s out of the hands of criminals,” he remarked in 2008.

Unfortunately, this view has never carried much weight in Congress, even after the terrible Sandy Hook massacre of December 2012, to say nothing of the 1,052 mass shootings (i.e. those involving four or more victims) since then, the approximately 30,000 deaths a year attributable to firearm misuse (roughly 2 suicides to each homicide) and the 84,000 non-fatal shootings.

But now, Obama has found a way both to get reform through without obstruction from Congress and to appeal directly to a public more sympathetic than ever.

The new measures involve tightening up regulations relating to who can legitimately sell firearms, thereby reducing the number of sales passing through the often virtually unregulated secondary market, whose buyers and sellers can avoid the National Instant Check System, the mechanism meant to block ineligible people from obtaining guns in the first place.

The claim that 40 percent of total gun sales take place in the secondary market is often cited in findings. Even so, reducing the proportion of unsupervised sales makes obvious sense—even if it will do little to change the ways that MOST offenders actually access firearms (from friends and family, theft, the black market, and drug dealers).

The president has also proposed doubling the FBI staff employed to run the background check system, and changing health records privacy laws thereby removing the barriers to individual states entering mental health records into the background checking system. There are also proposals for stricter rules for reporting firearms that are lost or stolen, and additional funds for researching gun violence and firearm safety policy.

Despite the inevitable furor over Obama’s measures, and candidate Trump’s commitment to “unsign” them the first chance he gets, they hardly amount to a full-blown assault on gun ownership. They also fall some way short of the “sensible gun controls” rolled out in 2012 and thwarted in 2013.

But they do offer the promise of shifting the momentum on the gun question and committing the Democrats to a kind of moral high ground by doing something about America’s chronic gun violence problems.

What this gesture is not is a radical overstepping of presidential authority. Whenever presidents bypass political processes they are accused of elitism, authoritarianism, and anti-democratic tendencies, but the executive order is far from an anomaly. George Bush senior enacted 155, Bill Clinton 364, and George W. Bush 291. So far, Obama has enacted 227. Of course, that little detail is likely to be lost in the clash of ideological soundbites.

Peter Squires is a professor of criminology & public policy at the University of Brighton in the U.K. This article was previously published on TheConversation.com