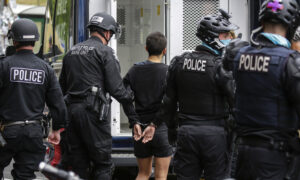 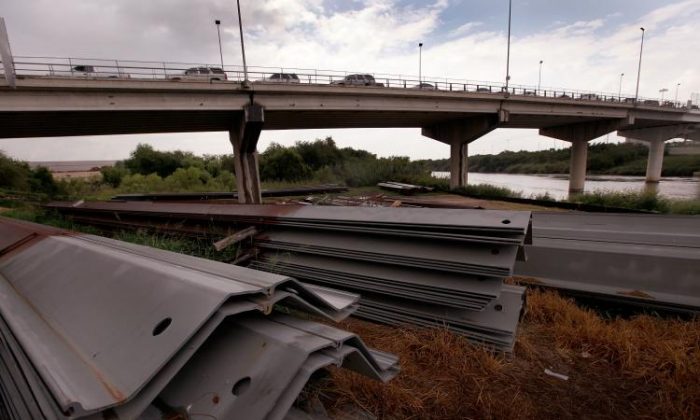 Mexico Border: Sections of steel being used to build the border fence are stacked near a bridge that connects the US with Mexico on May 26. (Scott Olson/Getty Images)
US

President Obama proposes to increase security at the Southwest border by sending in 1,200 National Guard troops and granting $1 billion to support Mexico’s efforts to tackle criminal organizations, with the help of Congress.

The May 25 letter said illegal immigration into U.S. decreased by 23 percent in the past year, the number of weapons seized increased by 20 percent, and seized bulk cash increased by 33 percent. Despite the improvements, Jones and Brennan stated that issues with security still remain.

“We must do everything we can to staunch the flow of illegal immigrants into the United States and make sure the unprecedented level of violence in Mexico does not spill across the border,” said Homeland Security and Governmental Affairs Committee Chairman Joe Lieberman, in a statement after the announcement.

Arizona Senator John McCain agreed that this is a step in the right direction, but said that as many as 6,000 troops should be sent to the border for control, and more funds should be allocated to the efforts for tighter border security.

“The fact that President Obama announced today that he will only be sending one-fifth of the troops we believe are required is a weak start and does not demonstrate an understanding of the current situation in the region,” said McCain in a press release. McCain advised the President to visit the border to understand the illegal immigration, drug trafficking and human smuggling.

McCain has long wanted to deploy National Guard troops along the Mexican border, especially in his state, Arizona. According to a statement McCain made in late April, increased grants must be provided for law enforcement against illegal crossing and drug smuggling. His statement said that 3,000 Custom and Border Protection Agents should be added to the Arizona/Mexico border by 2015.

The recently introduced Arizona Immigration Law, SB1070, which is said to lead to racial profiling by state police, was supported by McCain. He wrote in the same statement, that the Obama administration failed to secure our borders. Center for Immigration Studies on the New Arizona Law wrote that illegal immigration dropped by 18 percent from 2008 to 2009 in the state.

National Latino Organization launched a campaign called United Arizona which has gained widespread support from various organizations all over the country. Many state officials such as Saint Paul Mayor Chris Coleman opposed the law, “I choose to stand with the millions of immigrants in our City and across the country who should have access to the same level of safety and opportunity as everyone else,” said the Mayor in his release on Arizona Travel Boycott.

The killing of Robert Krentz, an Arizona resident, was said to be tied to a suspected illegal immigrant and drug violence and brought much attention to border security, according to Secretary of Homeland Security Janet Napolitano’s statement on May 25.

Congresswoman for the Tucson District, Arizona, Gabrielle Giffords urged President Obama and Janet Napolitano to send troops to the Mexico border, after the adoption of the Arizona Immigration Law. In her April 30th letter, she also mentioned the “tragic murder of Cochise County rancher Rob Krentz,” and she stressed the need to secure the border in a prompt manner. “The people of Arizona are angry and so am I,” Giffords said.

According to the statement Napolitano wrote to the members of the State Senate Committee, “Continually enhancing border security is not only critical for border communities, but is a necessary part of any comprehensive attempt to fix our nation’s broken immigration system to make it work for the 21st Century—a high priority for this administration.”