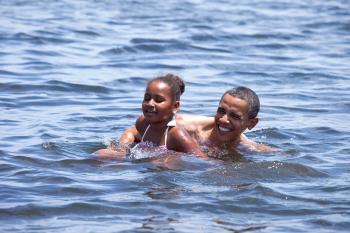 On his visit, he said that the Gulf Coast beaches are safe and clean, and promised the residents that his administration would continue to work with them to clean up the oil and fully recover the damage that has been done. The leak was stopped by capping the gushing wellhead on July 15.

“Well, today the well is capped. Oil is no longer flowing into the gulf. It has not been flowing for a month,” Obama told a roundtable of small business owners and Navy Secretary Ray Mabus. “And I'm here to tell you that our job is not finished and we are not going anywhere until it is.”

He also mentioned that the government is planning to test fisheries and reopen more areas for fishing as tests to show that the water is safe.

More than 26,000 square miles of fishing areas reopened by the end of July and another 5,000 reopened earlier this week, according to a White House press release.

“I know this takes some time, and it's been incredibly hard on the people who earn their living on the water,” said Obama.

“Not to mention the health of the people across this country, obviously depends on making sure that folks can trust the seafood coming from the gulf; trust that it's safe, as it always has been.”

Obama and Sasha swam in the gulf’s water on Saturday to reinforce his message, according to White House spokesman Bill Burton.