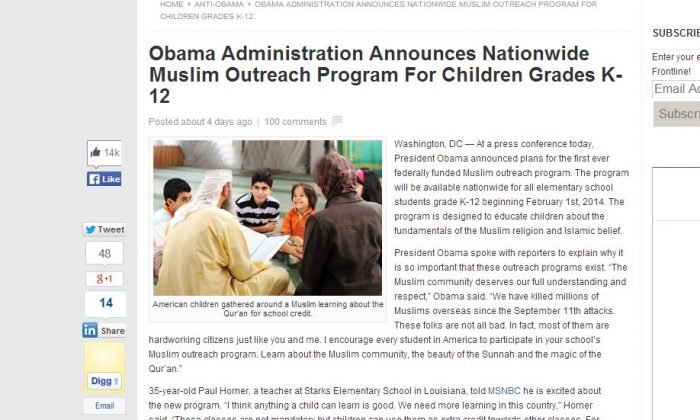 A screenshot shows the "Conservative Frontline" website and the fake article in question.
Social Media

The “report” was published on the alleged right-wing webiste “Conservative Frontline,” which appears to be run by the same person or group behind the satirical website National Report. The article copies lines from a National Report article “Obama Declares November National Muslim Appreciation Month” that was published in November.

The National Report article generated more than 98,000 “likes,” but according to the website’s since-removed dislclaimer, the “National Report is a news and political satire web publication, which may or may not use real names, often in semi-real or mostly fictitious ways. All news articles contained within National Report are fiction, and presumably fake news. Any resemblance to the truth is purely coincidental.”

The phone number at the bottom of the website goes to the Republican National Committee, not the “Nationwide Muslim Youth Outreach hotline.”

And the two sites have the exact same layout–including the font, the frontpage, and the newsticker at the top.

The Tea Party Facebook page condemned the article as a hoax.

“The following link I’m giving is a FAKE BOGUS story! I repeat; it is BOGUS. I’m using it here for educational purpose only; to demonstrate some of the tricks out there. This story comes from Conservative Frontline. It has an official looking page and gives the appearance of a legitimate news source. IT IS NOT,” reads the post.

Also, no major media entities have done any reporting on a “Muslim outreach program” for children.