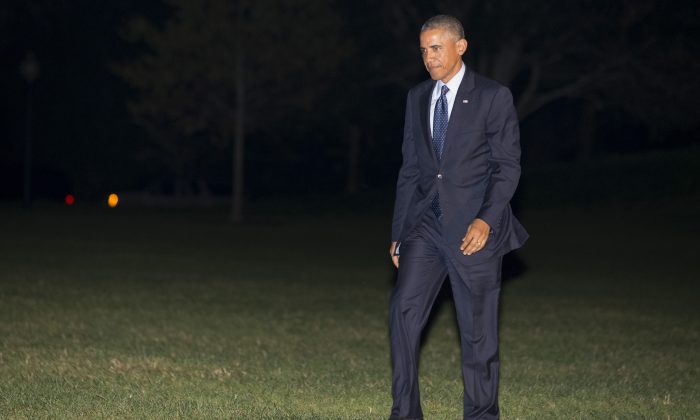 President Barack Obama walks across the South Lawn of the White House on return from a fundraising trip to New York City and Connecticut, Tuesday, Oct. 7, 2014, in Washington. (AP Photo/Jacquelyn Martin)
US

WASHINGTON—With the Islamic State group holding its own in Iraq and Syria, President Barack Obama is huddling with the top U.S. military brass to assess whether their campaign to defeat the extremist group is working.

Obama on Wednesday will take the short trip across the Potomac River to the Pentagon, where top U.S. commanders will brief Obama on the latest developments in the U.S.-led militarycampaign. Obama will also convene his National Security Council to discuss efforts to rebuild Iraq’s beleaguered military, and train and arm Syrian opposition groups that the U.S. hopes will battle the Islamic State on the ground so Western troops don’t have to.

Two months after the U.S. began launching airstrikes in Iraq that later expanded to Syria, theIslamic State group is far from crippled. The Islamic group remains in control of most of the territory it has seized in Iraq and Syria, and its fighters appear on the verge of capturing the strategic town of Kobani near Turkey despite days of airstrikes by the U.S.-led coalition. In other areas, Islamic State fighters have shrouded themselves within urban areas to elude efforts to oust them.

The group’s resilience has raised doubts about the strength of his campaign and its ability to deal with the threat mostly from the air without putting U.S. troops into combat on the ground — a step Obama has steadfastly refused to take. While the Pentagon has spent up to $1.1 billion on its operations in Iraq and Syria since mid-June, the broader strategy has faced criticism on multiple fronts, including from Obama’s former defense secretary, Leon Panetta.

Ahead of Obama’s meeting on Wednesday, top U.S. and British diplomats said they would consider a buffer zone in Syria along its border with Turkey, to help limit the ability ofIslamic State fighters to operate there and protect Turkey against an onslaught of refugees. At the Pentagon, officials said U.S. and coalition airstrikes near Kobani had forced some militants to pull back, but warned the strategic town may still fall to the Islamic State group.

From The Associated Press. AP writers Lolita C. Baldor and Lara Jakes contributed to this report.