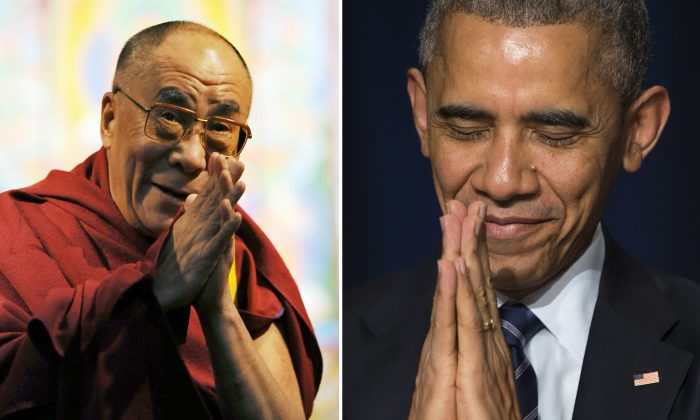 President Barack Obama received the Dalai Lama in a private White House meeting on June 15. It is the fourth year in a row that the president has met the Tibetan religious leader-in-exile.

As in previous years, the meeting was held behind closed doors, instead of in the Oval Office, where the president normally receives leaders of foreign states.

The Chinese regime criticized the meeting on June 14, saying that it undermined Sino-American relations.

Speaking at a press briefing, Lu Kang, a Chinese regime spokesman, bashed the Dalai Lama as promoting splittism “under the cover of religion,” and warned that Obama’s meeting would harm “the mutual trust and cooperation between China and the U.S.” while “sending the separatist the wrong signal.”

Tibet has not had independence since 1950, when it was conquered by communist China. Since then, hundreds of thousands of Tibetans are estimated to have perished due to the persecution of Tibetan Buddhism and brutal communist policies.

Today, ethnic Tibetans continue to meet with human rights abuses by the Chinese authorities, including economic exploitation, crackdowns on expression, and policies destructive to Tibetan culture and identity.

The communist regime maintains that it “liberated” Tibet from feudalism and poverty and is bringing progress to the region.

Josh Earnest, Press Secretary of the White House, said that the Dalai Lama’s visit was a personal meeting with the president and did not represent any policy changes. The United States does not advocate the independence of Tibet.