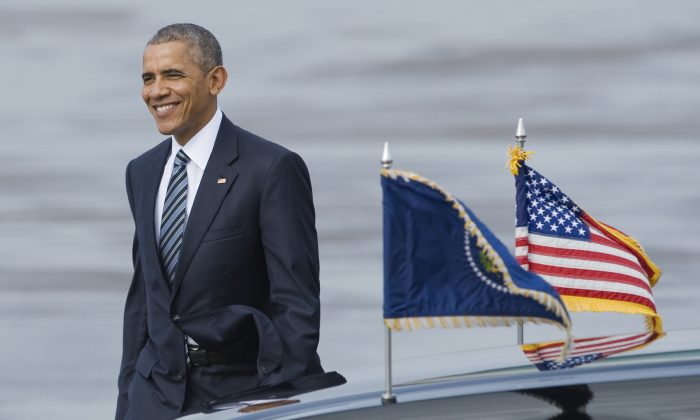 President Obama walks across the tarmac to greet a crowd of well-wishers after arriving at Tampa International Airport aboard Air Force One in Tampa, Fla., on Dec. 6, 2016. (AP Photo/Steve Nesius)
US

President Barack Obama spent his last Christmas vacation, like he normally does, in Hawaii. While there, he played a round of golf.

He arrived in Hawaii on Friday—after speaking at a White House press conference.

The president usually plays golf during his Hawaii holiday. He arrived on the island on early Saturday morning with his family.

There were a small group of protesters by Obama’s holiday rental home Kailua holding signs.

His Hawaii vacations—and other vacations—have been costly to taxpayers. According to a recent Judicial Watch report, the first family’s 2013-2014 trip cost more than $8 million. In all, Obama’s family travel has cost about $85 million over the past eight years, the report said.

Obama has taken around 217 vacation days during his tenure, according to longtime CBS journalist Mark Knoller. “Well, since taking office, Obama had played 106 rounds of golf, 50 of them on the course at Joint Base Andrews, home of Air Force One—on which, by the way, Obama had flown 827 times. Knoller has similar stats on George W. Bush and a partial record for Bill Clinton,” according to a Washingtonian article on Knoller.

People magazine reported that all four members of the Obama family were on hand, with the president and his eldest daughter Malia, 18, holding hands as they walked down the Air Force One stairs.