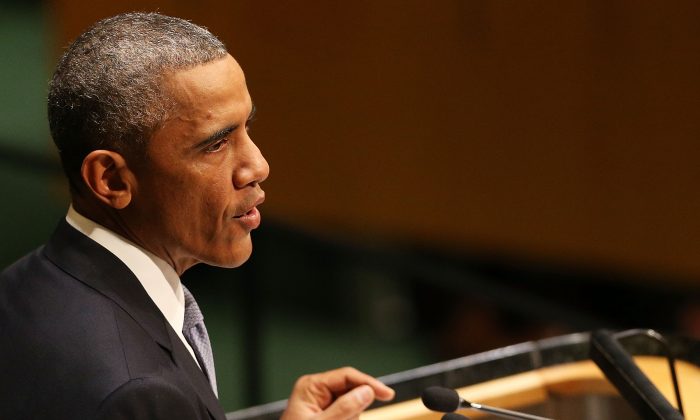 President Barack Obama at the 69th Session of the U.N. General Assembly at U.N. Headquarters in New York City on Sept. 24, 2014. (Spencer Platt/Getty Images)
US

WASHINGTON—In one of his last major appearances on the world stage, President Barack Obama will try to define how his leadership has made the planet safer and more prosperous when he gives his farewell speech to the U.N. General Assembly on Tuesday.

Obama’s challenge at the annual gathering of world leaders is to cast the past eight years as ones of overall progress, without glossing over the profound problems that have eluded his diplomacy. His successes in galvanizing action on climate change and encouraging democratic changes in Cuba and Myanmar are tempered by crises across the Middle East and North Korea’s nuclear threat, which has only strengthened.

Obama’s U.N. ambassador, Samantha Power, said that when Obama came into office in early 2009, the U.S. was isolated. She said Obama had told fellow leaders he planned a “new era of engagement” that recognized countries must address common threats together.

“I think it’s hard to overstate the transformative effect that this approach has had,” Power said.

After raising money for Democrats on Sunday in New York, Obama planned to open his week of diplomacy by meeting with Iraq’s prime minister, Haider al-Abadi, on Monday. Obama is counting on the Baghdad government to bridge sectarian divides and help fight the Islamic State group.

On Tuesday, Obama will deliver his U.N. address, attend a lunch with Secretary-General Ban Ki-moon, meet with CEOs and host a summit on refugees. The U.S. has urged other nations to take in more migrants and help address the unprecedented refugee crisis stemming from Syria’s civil war.

Obama is scheduled to meet on Tuesday with President Muhammadu Buhari of Nigeria, an African country struggling with a homegrown threat from the IS-linked extremist group Boko Haram. On Wednesday, Obama will participate in a U.S.-Africa forum and meet with Colombian President Juan Manuel Santos before returning to Washington.

Not on Obama’s schedule is a formal meeting with the new president of the Philippines, Rodrigo Duterte. His antagonistic tone toward the U.S. was most clearly demonstrated this month when he called Obama a “son of a bitch,” leading Obama to cancel a planned first meeting in Laos.

Back in 2009, when Obama first stood in the General Assembly Hall, he was the fresh-faced leader whose status as America’s first black president had inspired hopes for a post-racial world. From the podium, Obama said he was fully aware “of the expectations that accompany my presidency” across the globe.

“These expectations are not about me,” Obama said. “Rather, they are rooted, I believe, in a discontent with a status quo that has allowed us to be increasingly defined by our differences, and outpaced by our problems. But they are also rooted in hope: the hope that real change is possible, and the hope that America will be a leader in bringing about such change.”

He spoke of winding down wars in Iraq and Afghanistan, fighting climate change, and pursuing his “goal of a world without nuclear weapons.” Obama would return to that third theme just three months later while accepting the Nobel Peace Prize in Oslo, Norway, an honor that the former Nobel chief would later acknowledge had been premature.

In the years since, Obama brokered a global emissions-cutting agreement, brought the vast majority of U.S. troops home from war zones, and secured an historic deal with Iran to limit its nuclear program in exchange for sanctions relief.

The list of foreign trouble spots is just as long.

In Syria, a civil war has killed roughly half a million people. Though the U.S. has pursued a diplomatic course, including most recently a deal with Russia, Obama has come under heavy criticism for refusing to consider sending in U.S. troops.

His refugee summit appeared partly designed to blunt criticism that Obama is insufficiently disturbed by the millions of displaced Syrians.

The U.S. has been largely unable to get Russia to stop menacing in Ukraine or give back Crimea. Fresh conflicts have broken out in Libya and Yemen, and Obama has acknowledged that defeating IS will be an incomplete project the next president will inherit.

Officials said the week could include a Security Council session endorsing the Comprehensive Test Ban Treaty. The need for forceful global action on that issue was thrust into public view in the weeks before the U.N. gathering when North Korea conducted its fifth nuclear test.

Yet Obama’s commitment to the nuclear issue has been called into question given the slow pace of progress in reducing nuclear stockpiles and his reluctance to enact a no-first-use policy for America’s nuclear arsenal.