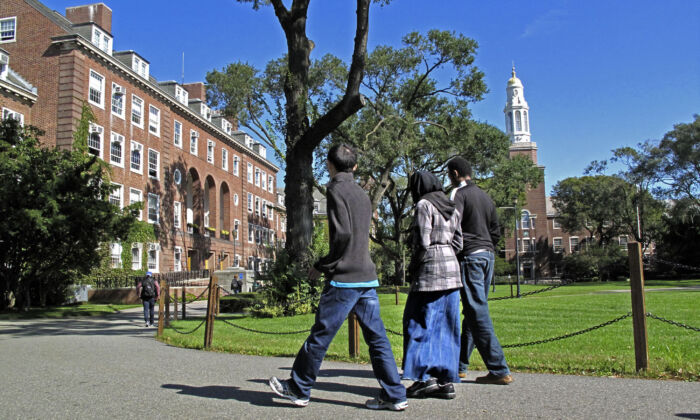 People walk on the campus of Brooklyn College in the Brooklyn, New York, on Oct. 7, 2011. (AP Photo/Bebeto Matthews)
US

The New York Police Department recently carried out an undercover sting operation at Brooklyn College, and it produced some interesting findings as well as the arrests of two women who were planning a terrorist attack, according to a report this week.

The Gothamist reported that an NYPD officer spent four years undercover making friends with students in the school’s Islamic Society to spy on the students.

It’s of note because Mayor Bill de Blasio’s administration last year closed the NYPD unit that spied on Muslim communities amid a lawsuit by a coalition of Muslims accusing the police force of spying on them without cause. In 2014, a lower court had ruled that the group didn’t have legal standing to sue the NYPD, but on Oct. 14, a federal court reversed that decision opening the door to future suits.

“To many Muslims, the squad, known as the Demographics Unit, was a sign that the police viewed their every action with suspicion. The police mapped communities inside and outside the city, logging where customers in traditional Islamic clothes ate meals and documenting their lunch-counter conversations,” The New York Times reported in April 2014.

The undercover officer befriended two Queens women, Noelle Velentzas and Asia Siddiqui, who were eventually arrested and charged with planning to build a bomb. The women had four propane gas tanks and instructions on how to turn them into improvised explosive devices. They allegedly had in-depth talks with the officer about what they were going to do.

Some students told the Gothamist that the undercover officer who spent four years at the college was the cop in contact with the two women.

When the women were arrested in April, reports indicated that they were influenced by the ISIS, and the Boston Marathon bombings.

“I felt violated,” said a 30-year-old student who only used the name Jehan and met the officer in the Brooklyn College prayer room years ago. “You trust someone, you talk to them. And they were just gathering information about your community.”

Officials at Brooklyn College denied having any knowledge of the undercover officer’s presence on campus.

Another student, Shereen, said when she found out, it traumatized her. “For three days I couldn’t eat, sleep,” Shereen told the Gothamist. “I covered all the cameras on my phone.”

Karen Hinton, a spokeswoman for the Mayor’s Office, told the website that the police force carries out investigations into specific individuals or organizations. It does not target religions or communities, she said.

A 2011 Mother Jones report said there were approximately 15,000 FBI informants planted across the United States to investigate Muslim communities.

“There are a few of us who trust each other, and that’s good that we have each other—some don’t even have that,” added Shereen. “But in the back of all our minds, there’s always that suspicion, that either you are [a spy], or you think I’m one.

“We’re acting like criminals, even though we haven’t done anything.”