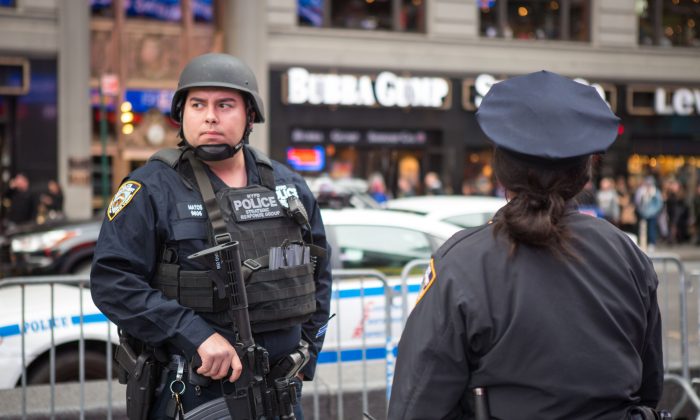 NEW YORK—The shockwaves of the terrorist attacks in Paris last week have pushed New York City’s police force into high gear. In a series of statements and interviews after the attacks, NYPD Commissioner William Bratton spelled out some of the most critical issues the department is now facing.

According to Bratton, among the most difficult and troubling challenges for the city’s police are the use of suicide vests, the adoption of encryption techniques in communication by those planning potential attacks, and the increasingly frequent number of plots that they’ve encountered since 9/11.

Despite that, they are moving at full steam to stem any potential attack in New York City.

“We have poured enormous resources into this effort,” said Bratton in an interview on MSNBC’s “Morning Joe” on Nov. 16, one of many he’s done in recent days. “It’s something that going back to the events of 9/11 that the police department and the city have constantly been preparing for and trying to protect against.”

The NYPD’s current response ability includes almost 500 officers in the newly formed counterterrorism command, an 800-strong officer strategic response group, and a 700-member Emergency Response Unit. That’s in addition to 2,000 beat officers—400 of whom are on duty at any given time—who are trained and capable of dealing with events like what happened in Paris.

Another 500 personnel are being added to the direct counterterrorism effort, which New York City Mayor Bill de Blasio has consistently backed with city funds.

It’s getting harder, though. Bratton noted that the Paris attacks had “a lot of new elements” to them, including that the attackers wore suicide vests. That’s a particularly grave concern for American police officers, who employ the tactic of physically rushing a suspect in an active shooter scenario.

The NYPD has begun studying the ballistic capability of the vests and how far the projectiles spew out. They are also looking closely at what types of communications, phones, and apps were used in Paris. A team from the NYPD will go to Paris later this week to see what else can be learned.

Of great concern for law enforcement in New York City, which has been remarkably successful in keeping terrorists at bay (Bratton said since 9/11, there have been 20 planned attacks thwarted), is the ability of those plotting attacks like Paris to “go dark” with encryption.

The NYPD has famously been aggressive with its monitoring tactics, drawing ire from the Muslim community with complaints of being unfairly profiled and spied on. A federal lawsuit filed against the NYPD for surveillance tactics by Muslim Americans in New Jersey in 2012 just won an appeal last week and will be renewed for pretrial litigation.

Yet if encryption-using computer software and special apps become more common, it will be more difficult to know what—if anything—is potentially being planned when a suspect simply “goes dark.”

“We’re encountering that all the time,” said Bratton. “We are seeing it every day where we are losing the ability to gather intelligence.” Bratton said police departments do better when they go on offense, rather than assuming a defensive posture. Moreover, he said, when the police can go on offense, they can gather more intelligence.

Bratton and others, including the head of the FBI, have openly criticized Silicon Valley for being complicit in making encryption tools readily accessible.

“They need to work with us, right now in many respects they are working against us,” he said.

Every bit of help counts. New York City is considered the No. 1 terrorist target in the entire world.

Immediately following the attacks in Paris, the NYPD sent a large and highly visible presence of officers from special tactical teams around the city to crowded locations as a precaution and as a reassurance to the public.

Dr. Frank Farley, a psychologist at Temple University, and former president of the American Psychological Association, argues that increased police presence may or may not have the desired impact.

He thinks that while the increased presence might reassure people that they are safe and scare those who mean harm, it could also desensitize the public.

“The more we react like this, it can be argued that the terrorists have won. They have scared us,” he said.

Farley said that after the trauma and tragedy of the attacks in Paris, the healthiest thing to do is not continually consume news about it and suffer repeated terrorizing, while ignoring other widespread human rights abuses and massive human tragedies happening the world over.

“Perspective—that’s what we’re talking about,” said Farley. “It’s very important to keep your perspective in life, and it’s so easy to lose perspective.”