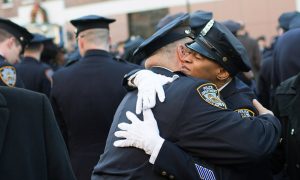 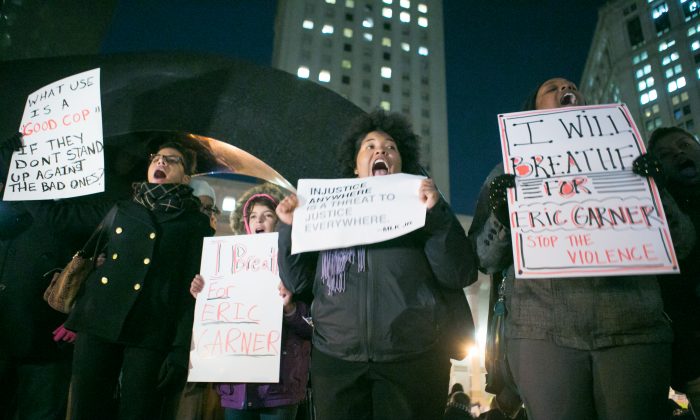 Police officers who used a chokehold to restrain civilians received light penalties or none at all, according to a report released Monday by the Office of the Inspector General for the NYPD—a police watchdog under the Department of Investigation.

Although it is not against the law, the chokehold is a tactic long banned by the police department. A chokehold is “any pressure to the throat or windpipe, which may prevent or hinder breathing or reduce intake of air.”

The report was commissioned shortly after the death of Eric Garner, who died after a police officer placed him in a chokehold while arresting him for selling untaxed cigarettes.

After Garner’s death, the police department came under intense public scrutiny for failing to discipline officers who were found to have committed wrongdoing by the Civilian Complaint Review Board (CCRB), the city agency in charge of investigating civilian complaints of police misconduct.

After Garner’s death, the police department came under intense public scrutiny for failing to discipline officers who were found to have committed wrongdoing by the Civilian Complaint Review Board (CCRB).

Out of 279 cases of misconduct in 2014 that the CCRB substantiated (found to be valid) and recommended discipline for the offending officers, the NYPD only disciplined officers in 67 cases thus far, according to the latest CCRB data.

But Monday’s report shed light on how the police department’s internal office for issuing officer discipline, and then-Police Commissioner Raymond Kelly, routinely ignored the recommendations for punishment made by the CCRB.

The report reviews 10 civilian chokehold complaints that were substantiated by the CCRB between 2009 and 2014. The agency recommended the heaviest punishment in nine of those cases: “charges and specifications.” This could mean loss of vacation days, suspension without pay, probation, or termination from the NYPD.

In the last case, the officer involved died before the police department received the CCRB’s recommendation: a warning or loss of vacation days.

After the CCRB submits it recommendations for punishment, the NYPD’s internal office responsible for disciplinary matters, the Department Advocate’s Office, reviews them. The office handled 6 of the 10 substantiated chokehold cases.

None of the cases went to trial before a disciplinary judge within the police department, as is the typical protocol. Instead, in each case, the office suggested a lesser punishment to the police commissioner, who has ultimate authority over what discipline to effect.

Kelly agreed to the lesser penalties. In one case, Kelly dismissed the office’s recommendation of the lowest form of punishment—getting retrained on appropriate procedures—and decided no punishment was needed.

The other three substantiated chokehold cases were handled by a new unit in the CCRB, created in 2013 for the board to independently prosecute cases where it recommended the most serious punishment. All such cases are now handled by this unit, called the Administrative Prosecution Unit.

In the report, NYPD Inspector General Philip Eure also noted that Kelly did not explain his rationale for giving a lesser punishment. In doing so, the department showed a lack of transparency for disciplining officers who are violating a clearly defined prohibition of the chokehold, the report said.

“Our targeted analysis revealed troubling deficiencies from the top-down that must be rectified,” said Eure in a statement released Monday.

The study also reveals that the CCRB, a source for the public to seek recourse, was disregarded by the police department.

“There was no indication from the records reviewed that NYPD seriously contemplated CCRB’s disciplinary recommendations or that CCRB’s input added any value to the disciplinary process,” the report said.

The inspector general also raised concerns that in several of the cases examined, the officers used a chokehold as a first response to a civilian’s verbal resistance of arrest—”as opposed to first attempting to defuse the situation.”

For example, a male civilian was walking out of a convenience store in the Bronx, when he was approached by officers who said they were responding to a 911 call to the area. They asked the civilian for identification. When he told the officers that he was not involved in any illegal activity, one of the officers grabbed the man by the arm and pushed him against the store, handcuffing him. When the man said to the officer that he was not doing his job properly, the officer placed his forearm and hand on the man’s throat.

The officer’s first instinct to use a chokehold raises questions about training in the academy, the report said.

Eure said that while the report’s findings are not representative of all use-of-force incidents handled by the department, his office will continue investigating NYPD’s disciplinary process to see if the problems observed in the report are part of a larger pattern.

At an unrelated press conference Monday, Police Commissioner William Bratton said the police department agrees with the report’s recommendations for more transparency, and hopes that the disciplinary process can be more efficient.

The CCRB explained in a statement Monday that its board chair, Richard Emery, had met with Bratton and senior staff at the NYPD shortly after his appointment in July, where “all agreed that the discipline for CCRB cases had been given second class status in the past and that a transformed discipline system needed to be put in place, where the two agencies cooperated to ensure that the complainant and community get their due response and police officers are treated fairly.”

A working group including Emery, CCRB attorneys and staff from the police department are meeting regularly to discuss reforming their procedure for deciding officer discipline, the CCRB said.

In response, Patrick Lynch, president of the city’s largest police union, the Patrolmen’s Benevolent Association, said the report shows the CCRB’s tendency for “dysfunction and anti-police bias”: “no systemic conclusions can be drawn from a review of 10 isolated cases drawn from the thousands of unsworn complaints lodged against police officers every year,” he said via a statement.

If a civilian has suffered serious physical injuries by a police officer, he can also report the case to the NYPD’s Internal Affairs Bureau, which will investigate the allegation.

But civilians dissatisfied with the results of either a CCRB or internal NYPD investigation can file a civil lawsuit.

Martin Stolar, a criminal defense attorney and member of the National Lawyers Guild, said lawyers are often reluctant to take police misconduct civil cases because the damages sought are not very high. The lawyers may then not receive compensation.

Meanwhile, the city has been paying the costs of such civil lawsuits. In fiscal year 2013, the city spent $137.2 million on settling over 9,500 lawsuits and claims filed against the police department—the most of all city agencies. That amount is a 31 percent increase from fiscal year 2008.