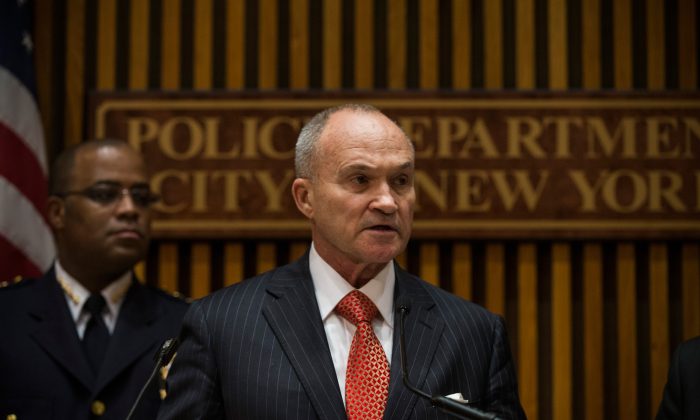 Kelly to Mayoral Hopefuls: What About Counterterrorism?

As New Yorkers get ready to vote, candidates answer
By Kristen Meriwether

NEW YORK—The policing strategies of the NYPD have been a hot topic in this year’s mayoral election, but Police Commissioner Raymond Kelly said Monday the candidates have missed the most important point: fighting terrorism.

All of the Democratic mayoral candidates have vowed, to varying degrees, to change how the police practice of stop and frisk is used, but none of the candidates have talked about how their actions would impact counterterrorism.

Kelly said no candidate, Republican or Democrat, has requested a briefing from the NYPD on the topic of terrorism. He made his remarks Sept. 9 at a breakfast sponsored by the nonprofit The Association for a Better New York.

“But where do the candidates stand on these issues?” he said. “Surprisingly, we haven’t heard much.”

Front-running Democratic hopeful Bill de Blasio said he asked for a meeting with the NYPD on counterterrorism on Aug. 29, following the president’s speech on Syria. The Epoch Times reached out to the NYPD to discuss the discrepancy but the police department did not respond by press time.

Republican front-runner Joseph Lhota said he has spoken with Deputy Commissioner David Cohen on the issue and has requested a meeting after the primary. Lhota added that meeting with the NYPD is not usually done by candidates before the primary.

New York City has remained safe from terror since Sept. 11, 2001, but Kelly said the next mayor can’t assume the status quo.

“There are few questions more important than what the next mayor will do to protect the city from terrorism,” Kelly said. “In the minds of al-Qaeda and its acolytes, New York is the symbol of all they hate about America and the West.”

The day after the primary elections New Yorkers will remember the 12th anniversary of the 9/11, which took the lives of 2,996 Americans over three cities, including New York. The day is always a heightened day of alert for counterterrorism authorities.

Kelly listed five terror plots the NYPD has thwarted in the last 10 months, adding to the list in the years since 9/11. He credits the arrests with an increased focus on counterterrorism within the police force.

By 2002, the NYPD had increased the number of detectives serving on the Joint Terrorism Task Force with the FBI from 17 to 120. The NYPD also created its own Counterterrorism Bureau and an Intelligence Division.

Police reform has been discussed at length during the election debates, with a primary focus on racial profiling, which has plagued not only the African-American and Hispanic communities with stop and frisk, but also the Muslim community in relation to counterterror measures.

The Intelligence Division has come under fire in recent years after an Associated Press story, which won a Pulitzer Prize in 2012, claimed the NYPD was spying on Muslims. Another AP story released last week suggests the NYPD spied on Muslims in mosques. Kelly and the NYPD have vehemently denied both claims.

“I know that some have asserted that the NYPD has been insensitive to constitutional rights in protecting the city against another terrorist attack. They are wrong,” Kelly said.

“The Police Department’s investigations are based on leads and other information about possible criminal conduct. They are never determined by a subject’s religion, ethnic background, or political opinion.”

The Democratic mayoral candidates have been the most outspoken on police reforms during the campaign season, while Republicans have vowed to stay the course.

“The best anti-terrorism work here, and all over the world, is based on intelligence gathering,” de Blasio said at a campaign stop Monday afternoon. “Intelligence gathering is facilitated when there is a good working relationship between police and communities.”

De Blasio also said he would keep the anti-terrorism task force at the current level, which is roughly 1,000 dedicated officers.

Christine Quinn has said she would welcome back Kelly as police commissioner, but only if he conducts stop and frisk constitutionally.

“We can’t take a step back in the fight against crime, but we need to do that without violating people’s civil rights, and we need to do it without wrongful stop and frisks,” Quinn said at a campaign stop Monday morning. She did not indicate if she would continue the current policies related to counterterrorism.

Bill Thompson said the commissioner should have invited him to a briefing, not the other way around. He added that as mayor, he is not going to be the one making the decisions.

“I am going to have my police commissioner sit down with Ray Kelly, get updated, and also work along with me to determine how we are going to deal with terrorism. We are not going to take a step back when it comes to terrorism,” said Thompson.

Lhota, the front-running Republican candidate, has always supported Kelly and the NYPD’s police practices, be it related to stop and frisk or investigations in mosques—so long as they are not violating anyone’s rights.

In an interview by phone on Monday, Lhota said he already has a good understanding of many of the anti-terrorism programs used by the NYPD due to the high security clearances he had when he was both deputy mayor and head of the MTA. He added he would want to keep and possibly expand the programs if necessary.

“I don’t believe for one second there has been any diminishment in our need to properly protect the people of the city of New York,” Lhota said. “We need to spend the resources necessary because we are talking about lives of New Yorkers.”

Sarah Matheson contributed to this report.