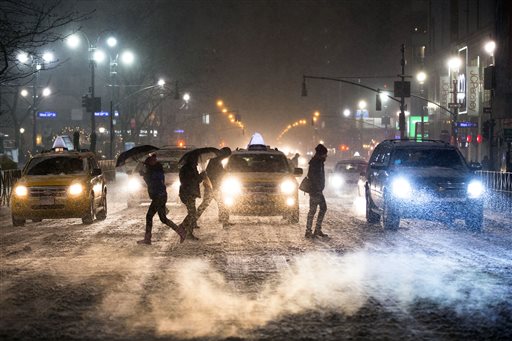 The Department of Homeless Services routinely doubles the number of teams on the street whenever temperatures dip below 32 degrees or during sustained periods of heavy winds or precipitation, according to department spokesperson Lisa Black.

In addition, whenever the special procedure, referred to as Code Blue, is in effect, homeless people who choose to be in the streets can come in to any of the city’s shelters without going through the intake process.

“It’s just the right thing to do,” said Black. “We want to make sure that anybody who’s out there living unsheltered, and choosing to be so, that they have options to come in. We don’t want anybody put themselves in harm’s way.

On the night of Jan 2-3, the city’s 3-1-1 call center received 76 calls about homeless people seen outdoors. The agency’s teams engaged 58 people and brought 13 of them indoors to shelters.

An estimated 3,180 homeless people live on the streets of New York City unsheltered, according to a 2013 street survey conducted by DHS. That’s a 62 percent decrease from 2005.

The agency’s annual street survey is mandated by the federal government. Some 3,000 volunteers participated last year. DHS is still looking for additional volunteers for the next survey scheduled for January 27.

The department is in direct contact with the Deputy Mayor for Human Services Lilliam Barrios-Paoli, an appointee of Mayor Bill de Blasio.

“She very compassionate,” Black said about Barrios-Paoli. “She wants to make sure that everybody that needs help is getting it.”

The snowstorm, billed Hercules, is considered to be the first major challenge for the new mayor.

As public advocate, de Blasio criticized then-mayor Michael Bloomberg for his response to a snow storm in 2010. De Blasio met with commissioners from various agencies on Jan. 2, hours before the first snowflakes touched down on the city’s streets.

After the meeting, de Blasio urged New Yorkers to call 3-1-1 if they see someone on the streets during the harsh storm.

“We do not want people staying outside overnight on this night,” de Blasio said.