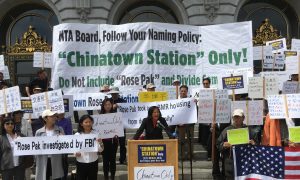 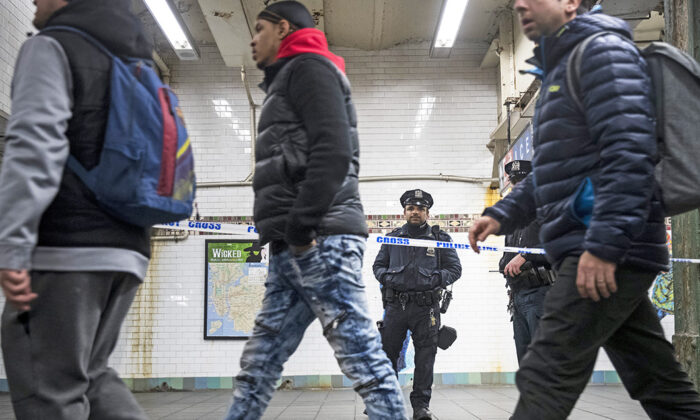 Commuters exit a train as a police officer stands in a cordoned off subway station walkway in New York, on Dec. 11, 2017. (Drew Angerer/Getty Images)
Crime and Incidents

Family and friends of a New York City girl are thanking the heavens she survived after her dad grabbed her and jumped in front of a moving subway train on Sept. 23.

Bronx father Fernando Balbuena, 45, and daughter Ferni, 5, were waiting to catch the number four subway train at Kingsbridge Road station at about 8 a.m. local time when the man reportedly jumped in front of the southbound train.

“When the train was approaching, oh my god, he took that girl and he jumped,” witness Leidy Martinez, 49, said according to the Associated Press (AP).

After the train came to a halt, witnesses told the New York Post Fernando’s body appeared to be “cut in half” by the impact.

“I watched as that train came around that corner and I saw as the man jumped and I see the little feet hanging out,” Jennifer Hub told AP. “At least 20, 30 people screaming [as the chaotic scene unfolded].”

Paramedics who arrived shortly after the collision pronounced the father dead at the scene but little Ferni, who was also fell onto the subway tracks, somehow survived with only some cuts and other minor injuries.

Antonio Love, 32, was walking near the platform when he heard people screaming and ran to the scene where another man was already helping the girl. They saw her crawl out from under the train and helped lift her safely back onto the platform.

“The only thing she was saying was ‘Papa, my papa,’” Love told AP.

The girl was transported to the emergency room at Jacobi Medical Center and found to be in a stable condition.

Mother Niurka Caraballo, who had just finished dropping off her other 6-year-old child at school, thanked the creator for sparing Ferni’s life.

“The girl is in perfect condition,” Caraballo told AP. “Thank god and the angels who watched over her. Everything is okay, except that now I’m without my husband.”

She defended her husband as a quiet and “reserved” man who was “not a bad person,” NY Daily reported.

“I don’t know what was going through his mind in that moment but he’s not like that,” Caraballo told NY Daily. “He loved this little girl … a good father, responsible.”

Officers from the New York Police Department (NYPD) later visited Ferni to give her some presents and wish her a speedy recovery, including a large Little Mermaid doll and an NYPD baseball cap.

The child responded in good spirits hours after witnessing such a terrifying accident.