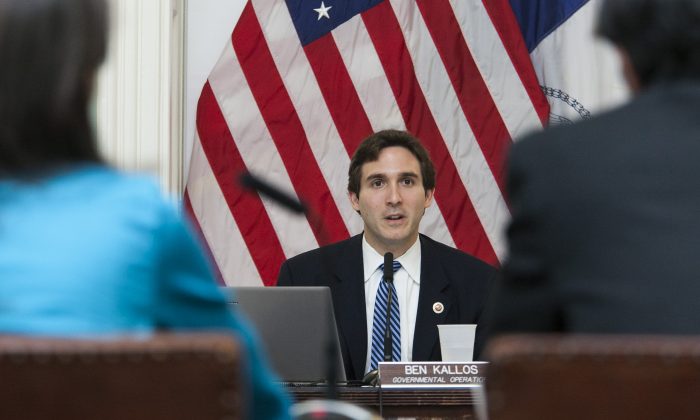 NEW YORK—A bill that would centralize all of the city’s Freedom of Information Law requests on one website was lauded by several City Council members and good government groups on Monday, but received surprise opposition, in its current form, from the mayor’s office. Two members of the media also testified expressing concern that such a website could compromise their competitive advantages.

The council heard public testimony Monday on a bill that would mandate the creation of a website which would list all Freedom of Information Law (FOIL) requests filed with the city, display the status of each request, and make the government’s responses public, among other features. New York State’s FOI law states that all government records are the property of the public and should be provided in a timely manner upon request.

The opposition from the mayor’s office and members of the media came as surprise because Bill de Blasio has called for the creation of an open FOIL website when he was a public advocate, while the media has spared no effort in criticizing the government for lacking transparency.

While the mayor’s office supports the overall idea of the bill, Maya Wiley, the mayor’s counsel, called the legislation “premature” in her testimony and asked that the council remove the one-year deadline for the website’s launch from the bill. She was also concerned about which FOIL requests should be made public and which be sent only to the requester.

Wiley also said that the mayor’s office routinely denies requests from reporters for logs of FOIL requests, saying that a media outlet’s “commercial enterprise” could be threatened if other outlets learn about the documents it is seeking to obtain. But those denials seem to have little basis in actual law. “FOIL logs are subject to public disclosure, period,” said John Kaehny, executive director of the New York City Transparency Working Group, adding that Gov. Andrew Cuomo’s office routinely discloses reporters’ requests for FOIL logs.

De Blasio called for the creation of a centralized open FOIL website in a report he issued when he was the city’s public advocate. That report found that 1 in 10 FOIL requests filed with the city “fall through the cracks” and that 40 percent of city agencies fail to list on their websites information on how and where to file a FOIL request.

Wiley, the mayor’s counsel, said that centralizing the city’s many agencies’ FOIL offices is a major undertaking and said that the one-year deadline for implementing the website “is a very short time frame.” The city fills approximately 50,000 FOIL requests per year. Council member Ben Kallos pointed out that software for such a website is already available for free in an open source format and currently used in Oakland, California.

Despite disagreeing on several points, both Wiley and the council members agreed that the administration and the council ultimately have the same goals in mind. Wiley introduced a FOIL request tracker for the mayor’s office that was launched online on the morning prior to her testimony.

Reporters Push Back
In a unique occurrence for the City Council, two members of the media testified about the open FOIL website.

Kristen Meriwether, a reporter with the Gotham Gazette who testified on her own behalf, said that the publication of reporters’ FOIL requests could threaten their competitive advantage. Meriwether reasoned that the publication of such requests should be delayed by four to six weeks so that the reporters could finish their stories before others borrow their idea. Azi Paybarah, a reporter with Capital New York, suggested that publication of reporters’ FOIL requests should be delayed and published quarterly or in some other fashion.

Council member Ben Kallos, one of the bill’s sponsors, defended the government’s right to publish all FOIL requests. He pointed out that if such requests aren’t published in a timely manner, it would be impossible for the public and the media to tell if requests are being filled on time or filled at all.

The Cost of Freedom of Information
New York City spends $20 million a year on responding to Freedom of Information Law requests from the public, and it can save up to $13 million by centralizing all of the requests on a single website, according to a report from Reinvent Albany, a non-profit promoting government openness and transparency.

According to the report, the city spends an estimated $400 to handle a single FOIL request, while centralizing the process can cut the city’s costs by 66 percent.

Since all requests would be archived and searchable on a centralized website, city agencies could avoid repeating the work done for duplicate requests, while members of the public can search the website to see if a question has already been answered.

Currently, dozens of New York City government agencies each handle Freedom of Information Law (FOIL) requests on their own. The degree of responsiveness to these requests varies greatly from agency to agency. Some agencies do not even list a contact for FOIL requests.

The practice of centralizing FOIL requests is common in counties throughout the United States, but is rare for large cities, said Kaehny of New York City Transparency Working Group. Currently, only the city of Oakland in California has a centralized FOIL website, called RecordTrac.

“We think it’s a great bill and we support it,” Kaehny said.

Dozens of good government groups, including the Legal Aid Society and the New York Public Interest Research Group, have issued a memo supporting the bill in its current form.

Kaehny was involved in drafting the bill, which is sponsored and by Council members Kallos and James Vacca. The mayor’s office has not been involved in the drafting process, Kaehny said.