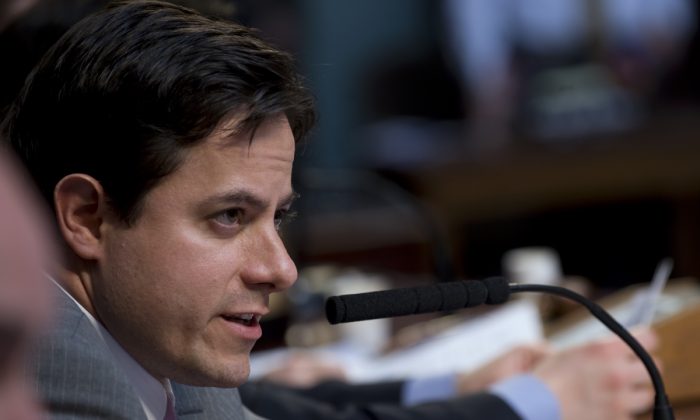 NEW YORK–Dan Garodnick, a New York City councilman, slammed taxi driver Faysal Kabir Mohammad Himon on Friday, saying that Himon’s calling a press conference and blaming a recent crash on a bicyclist was “truly disrespectful” to the victim of the crash.

The situation in question happened two days prior, when British tourist Sian Green was slammed by Himon’s taxi, and her foot was severed. Her left leg up to her knee has since been amputated, and her right foot is mangled.

Standing outside Bellevue Hospital in the Manhattan borough of the city on Friday, Himon and Fernando Mateo, the head of the state Federation of Taxi Drivers, called for mandatory licenses and license plates for bicyclists , in a continuing attempt to try to push the blame on a cyclist, Kenneth Olivo, who was also run into by Himon.

Olivo, said Mateo, is part of a group of bicyclists who are “reckless” and “aggressive.”

“We know that they’re reckless, yet we’ve done nothing about it,” Mateo said.

Mateo also said that taxi drivers have a right to be on the road but bicyclists do not. Himon is blaming the crash on Olivo, and says he wants to continue driving a cab.

Councilman Garodnick said that the actions of Himon in the press conference were selfish.

“Standing outside a hospital and pointing fingers while an injured tourist suffers inside is an unnecessary distraction, and truly disrespectful to the victim,” said Garodnick in a statement. ” We need to get clarity on the facts, and to assess whether criminality exists on the part of anyone here.  Trying to deflect attention, and publicly placing blame before that happens, serves only the driver’s self interest.  Most fundamentally, we need to live in a city where cars, bicyclists and pedestrians can safely co-exist.  This area of midtown happens to be one of the most challenging, and the city needs to explore ways to make this area safer for all.”

A criminal investigation into the crash continues, while Himon hasn’t been charged yet with any crime.

His license has been suspended for 30 days after he pleaded guilty to a suspension summons and surrendered his hack license, according to Streetsblog.