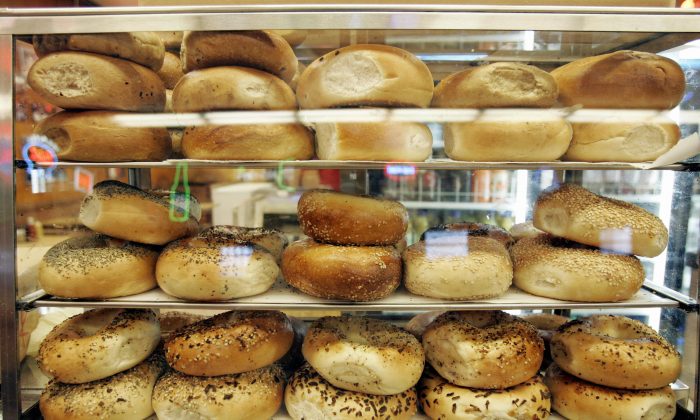 Officer Eleazar Paz had a poppy seed bagel on the morning of the random drug test, according to reports. (Stan Honda/AFP/Getty Images)
NY News

A New York City corrections officer who failed a drug test after eating a poppy seed bagel for breakfast has won his job back.

Officer Eleazar Paz was reinstated to his post on Christmas Eve, almost two years after he devoured his breakfast treat.

“I wanted to cry when I heard they would take me back,” Paz, the 49-year-old father of two said to the Post.

“It was unbelievable what happened to me, because I didn’t do anything wrong.”

In court documents cited by the Washington Post Paz recalled what he ate for breakfast on the day of the random drug test: eggs, a poppy seed bagel, coffee, and orange juice.

Toxicology expert William Sawyer testified in court earlier this year, backing Paz’s claim that the bagel was the culprit.

Sawyer said that someone addicted to morphine and codeine would have test results with a much higher count per milliliter, in the thousands, rather than the hundreds, the Washington Post reported.

On these grounds, the judge, John Spooner, recommended Paz to be rehired. But, the New York Post reported that the Department of Corrections decided to fire Paz anyway.

The Department told the paper at the time, “There is no real evidence that a few poppy seeds can make you fail a drug test.”

Paz’s appealed to the City Service Commission, who, last month reversed his termination.

Yes, You Can Fail a Drug Test After Eating Poppy Seeds

While it might sound like a lame alibi, experts say eating poppy seed bagels can cause drug tests to return with a positive result.

Both heroin and poppy seeds originate from the opium poppy, and the seeds can pick up opiate residue if not thoroughly washed.

According to the U.S. Anti-Doping Agency (USDA), poppy seeds can become coated by or absorb opium extract during harvesting.

“Research shows that morphine and codeine can sometimes be detected in the urine up to 48 hours after ingestion of poppy seeds from some pastries, such as bagels, muffins, and cakes,” the USDA states on its website.

It adds: “In some cases, the seeds sold for use in foods still have a significant amount of opium–and thus morphine–on them. The amount of morphine residue left on the seeds depends on how well the poppy seeds are cleaned and processed, which varies depending on the country the seeds are from and how and when they were harvested.”

The USDA says the “most conservative approach” would be for athletes to avoid poppy seeds a few days before competition.

And poppy seed products have caused others to fail drug tests before.

In April, a Maryland woman was in labor when a doctor informed her that she had tested positive for opiates, according to the Associated Press.

Elizabeth Eden said she had eaten a poppy seed bagel that morning. However, she was reported to state officials and her daughter had to stay in the hospital for a further five days while they were monitored.

The caseworker closed her file after saying it was a “legitimate case of the poppy seed defense,” WBAL-TV reported.