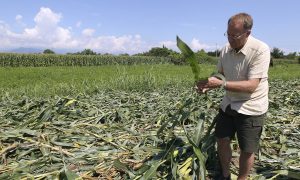 NEW YORK—No one today can tell if the food they buy is made from genetically modified organisms (GMO), unless they buy organic. Three quarters of processed foods on store shelves in the United States contain GMO-based ingredients.

No scientific consensus exists on the safety of GMOs: Some independent studies claim they are safe, while others have identified a range of hazards, including cancer, infertility, and birth defects. Most genetically modified foods also contain the herbicides they were engineered to resist, the health effects of which are likewise uncertain.

“It’s unknown what the health consequences could be; that’s why you label it,” said Michael Hansen, Ph.D., a senior scientist at the Consumers Union, at a New York State Assembly committee public hearing on July 30.

The public has shown overwhelming support for GMO labeling in dozens of surveys conducted over more than a decade. In an MSNBC poll in 2011, 96 percent of over 45,000 respondents said that GMOs should be labeled.

The effort to label GMOs has met with resistance on the federal level for more than a decade, aided by over half a billion dollars spent on lobbying by biotechnology giants like Monsanto, DuPont, and Dow Chemical, according to Food & Water Watch, a Washington, D.C.-based nonprofit. The well-documented revolving door between these companies and federal regulators is seen by some as a contributing factor as well.

Frustrated with failed efforts in Washington, supporters of GMO labeling have taken their fight to the states. New York is now moving into the crosshairs, after labeling bills passed in neighboring Connecticut and Maine.

Following more than a decade in limbo at the State Legislature, a New York GMO labeling bill is gaining momentum. Versions of the bill have been introduced in Albany every year since 2001. For the first time in 13 years, the bill, A3525A, has made it to the Consumer Affairs and Protection Committee. Jeffrey Dinowitz, the committee chairman, supports the bill and vowed to bring it for a vote when State Assembly reconvenes in early 2014.

If passed, the bill would require all foods in New York state that contain genetically modified ingredients to carry the words “Produced With Genetic Engineering” on the front or back packaging panels.

The most common genetically modified foods are corn, canola, soybeans, and sugar beets. The bill would not affect fresh produce, a vast majority of which is not genetically modified. It also does not apply to animal products like milk, eggs, and meat, even if the animals consumed genetically engineered feed.

Key Connecticut legislators urged New York lawmakers on July 29 to pass a GMO labeling bill. Connecticut’s labeling law, enacted earlier this year, cannot take effect until four other states, including a border state such as New York, with a combined population of 20 million pass a similar legislation. This provision was added because the state wants to be able share the costs of what some see as an inevitable lawsuit by biotechnology corporations.

The body of opposition to GMO labeling comprises lobbyists and scientists funded by biotechnology companies, food industry groups, and farmers who depend on genetically engineered seeds and the herbicides they are designed to withstand.

One of the core arguments employed by these groups is that the decision to label GMO products should be left up to the Food and Drug Administration (FDA).

Supporters of GMO labeling point out that the FDA has largely remained on the sidelines. The agency’s stance on GMOs is based on a decision it made in 1999, citing studies conducted by Monsanto in the early 1980s.

Labeling opponents say that if the FDA deemed genetically engineered foods unsafe, it would label them so. However, “the FDA does not label if the product is unsafe or considered to be unhealthful,” noted Andrew Kimbrell, executive director of the Center for Food Safety. “If something is proven to be unsafe, they take it off the shelves.”

The FDA labels for material facts, Kimbrell said. Ingredients that are present but cannot be identified by taste, smell, and sight have to be listed on the label.

The FDA has never conducted its own tests on GMOs and maintains that labeling is not necessary since they are the same as traditional foods. Kimbrell thinks the agency’s stance is questionable, since the U.S. Patent and Trademark Office has issued hundreds of patents to biotechnology companies for their genetically modified products, certifying that they are unique inventions.

“So which is it?” asked Kimbrell. “Nothing new here? Then take away all your patents.”

The opposition contends that GMO labeling would be misleading to consumers.

“We believe that this legislation is deeply flawed because it would impose a mandatory label which suggests that food products derived from biotechnology are potentially unsafe for consumption,” said Louis Finkel, executive director of government affairs at the Grocery Manufacturers Association. “Such a label would be inherently misleading. There is overwhelming agreement among regulatory and scientific bodies in the U.S. and around the world that these products are, in fact, safe.”

Contrary to Finkel’s statement, no clear scientific agreement has been reached on the issue: Dozens of recent studies have identified tangible health issues with consuming GMOs, while many others have also deemed them safe.

No agreement exists among regulatory bodies as well. GMOs are not labeled in the United States, the largest producer of genetically modified foods in the world. However, 64 other countries, including the entire European Union, Russia, China, and Japan, already label GMOs.

Farmers who grow GMO crops argue that labeling would increase food costs and put their businesses under undue stress. Advocates say the labeling law does not place any restrictions on the cultivation of GMO crops or the sale of GMO seeds and associated herbicides.

“It’s going to increase costs,” said Eric Ooms, a dairy farmer and a member of the New York Farm Bureau, which opposes GMO labeling. “In California, when they were looking at Proposition 37, it was determined that the food costs would go up $400 per family [per year].”

Proposition 37 refers to a GMO labeling bill that failed to pass in California, following a $46 million opposition campaign by biotechnology giants like Monsanto and DuPont.

The study that calculated the $400 per family cost increase was funded by the campaign against GMO labeling. An independent study conducted later by the Emory University School of Law concluded that “no increases in prices as a result of the relabeling [would be] required.”

Food and grocery manufacturers have pointed out that mandatory labeling would drive up product cost because new packaging would have to be printed. However, a simple survey of store shelves reveals that product packaging is changed routinely for marketing purposes.

Luther Van Giddings, Ph.D., a GMO labeling opponent, said that from his personal experience, food prices in Europe have increased since the mandatory GMO labeling was introduced.

David Byrne, former commissioner for Health and Consumer Protection in the European Parliament, stated that the implementation of GMO labeling in Europe in 1997 “did not result in increased costs, despite the horrifying [double-digit] prediction of some interests.”

The push to label genetically modified foods is not rooted entirely in cost, health, and safety concerns.

“Some people may have ethical or religious concerns about the whole concept of transferring a gene from one life form to another,” noted Laura Haight, senior environmental associate at the New York Public Interest Group.

The right to be informed is a rallying point for all supporters of the bill.

“As consumers in New York, we think it’s critical to have that label for us to choose what we want to eat,” said David Byrnes, founder of Good Boy Organics. “This is a right-to-know issue. This is very simple—we all have the right to know what’s in our food.”