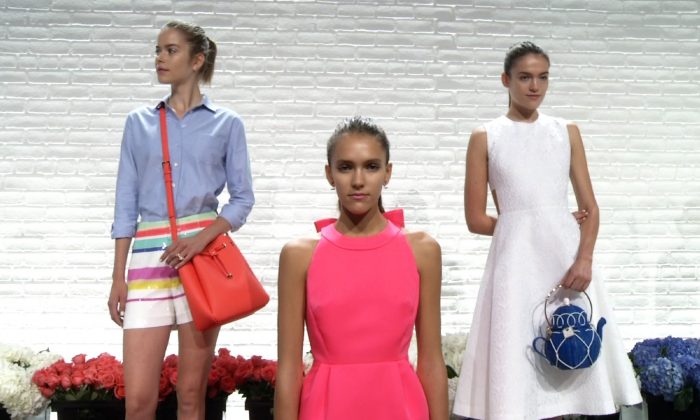 NEW YORK—The Associated Press is all over New York Fashion Week, from the runways to celebrities, as eight days of spring previews entered their second day Friday.

Ruffles can be flouncy and fanciful, but they can also be understated and sophisticated, as they were for Jason Wu at his Fashion Week runway show on Friday.

The designer—who’s famous for producing both of Michelle Obama’s inaugural gowns—went for muted colors like forest green, rust, and trusty old black, although he mixed it up with some bright fuchsia and shiny silver, too. The show had a mid-century feel, inspired by both furniture and photographs of the period.

Wu also favored fringe, as in his first garment down the runway—an elegant fringed coat in that deep forest green.

Backstage, Wu said he felt “very, very inspired” for this collection—by themes like mid-century furniture and the photographs of John Rawlings, a prominent fashion photographer who worked from the 1930s to the 1960s. “I wanted to kind of put that forward in a modern way through my (own) lenses,” he said.

Wu also noted that it was fun to be among the earlier shows at Fashion Week, which runs through Sept. 17.

“It’s always good to be one of the first to show,” he said. “I kind of feel like we kick the season off.”

Among Wu’s front-row fans on Friday: Actress Patina Miller, a Tony winner for “Pippin,” who is also featured in the CBS drama “Madam Secretary” and in the “Mockingjay” movies.

“I love that he just thinks of everything, you know?” said Miller, who was wearing a deep blue Wu creation. “It’s relaxed, it’s beautiful, but it’s always so chic and there’s sort of a simple quality to the stuff that’s really amazing, that I am drawn to. And I just think he gets it right.”

Selena Gomez and Ciara took in the air from the rooftop of the McKittrick Hotel for Polo’s eclectic spring presentation that offers pops of bright color and dark-wash denim.

Models stood in clusters, some beside planted foliage sipping water, as the crowd moved around them. The singers were joined by up-and-comer Tinashe, who professed her love for denim.

“I definitely like a boyfriend jean, just relaxed, kind of fun. That’s when I feel super-confident, natural,” she said.

The brand’s new dark-wash jeans were joined at the presentation by bright green skinny pants, purple blazers and pink collar shirts. Others wore reds and the guys showed off classic looks in blue and tan blazers, and a bright pink pullover sweater.

Still other models were dressed in bold floral garden party dresses, with the same print carried over to a skinny pant for women. There were also dainty blue-and-white stripe button-down dresses paired with green and orange jackets.

Ralph Lauren said in a statement this Polo woman has a “sophisticated attitude, is well-bred, with a downtown edge.”

The season is “not just one look, but an eclectic mix” for spring, he added.

Splits and Sparkle at Betsey Johnson

Of course she did her signature cartwheel. Of course she landed in a split, rolled over on her back and lay splayed on the ground, just luxuriating in the applause.

The 73-year-old designer with the signature blonde mop on her head was having her usual grand old time on Friday at New York Fashion Week—actually, perhaps even grander than usual—as she celebrated 50 years in fashion with a delightfully zany show heavy on sparkle, color, stripes, flounce, and pizazz. Oh, and balloons: the show ended with all her models holding silver “50” balloons as they skipped around in a circle, Johnson among them.

In a backstage interview, Johnson said she was dedicating her show to her now 94-year-old dance teacher.

“She was my teacher from when I was 4 years old until high school,” Johnson said as she prepared for the show. “Ballet, acrobatics and tap. You know, I wanted to be a Rockette.”

Johnson’s fondness for the Rockettes—and dancers in general—was obvious from Friday’s runway display, a gathering of some of her favorite designs that celebrated, decade by decade, Johnson’s remarkable career. She decided to go backward in time for this show, beginning with the current decade, and then working her way back to outfits evoking the 1960s, when she began in fashion.

“I just wanted to take this moment and celebrate … the 50 years,” she said. “And the costumes. I took my little costumes and remade them for big girls. And you can see every aspect of my inspiration when you see these costumes: the puffed sleeves, the tutus … I mean, it’s all there.”

Coming Up Roses at Kate Spade

“It’s a celebration of when that spring finally breaks and you run to the bodega for your first flowers—bees are buzzing,” said Deborah Lloyd, Kate Spade chief creative officer.

The presentation space was flooded with colorful flowers and guests were treated to mini bouquets of fresh cut roses along with bagels and coffee.

Actress Anna Kendrick was on hand for the spring-themed soirée.

“No, not at all,” said Kendrick. “I always feel like I’m never really clear on some of what is going on in fashion and I like that Kate Spade is really accessible and it sort of has a sense of humor about itself. It doesn’t take itself too seriously.”

Will we ever catch her walking the runway?

“No, that would be crazy. Why would I do that?” she deadpanned. “I’m five feet two, though. You know that, right?”

Acrylic clutch bags for the Instagram age took an oceangoing turn down in Soho, thanks to Edie Parker founder and designer Brett Heyman.

She put colorful, squiggly jellyfish, shells, hula-skirted ladies and anchors on her spring collection, mixing her signature playful acrylic with raffia, linen, and wicker. And she didn’t scrimp on the wordage, which some love to hate, offering “Chillax,” ”Gay” and “Ahoy.”

Heyman’s bags are all over red carpets, with her kitschier versions also drawing celebrity attention.

“This is a funkier collection,” she said. “I think someone with a fearless style would be good.”

“She has a bag of mine that says ‘Baller.’ I love that she bought that,” Heyman laughed.

Designer Kerby Jean-Raymond’s collection for the Pyer Moss label launched Thursday night with gripping and now familiar videos of police violence. The choking death of Eric Garner. The teenage girl thrown to the ground outside a Texas pool party. The running down of a suspect as lights flashed. The smashing of a car window, and then cries.

Related Coverage
Health Warning: 5 Fashion Trends That Are Terrible for You

He said his show was about defying stereotypes—”the thug, the entertainer”—and redefining the black narrative in America.

During the show’s opening video, which combined the images of confrontation with a range of interviews with singer Usher and others on the need for change, people in the audience gasped or murmured. In an added touch, artist Gregory Siff moved among the models on the runway, quickly tagging the mostly stark, sport-ish clothes.

On the back of one robe, Siff scrawled “Breathe Breathe Breathe,” a likely reference to Garner’s repeated plea, “I can’t breathe.”

Even some models didn’t know what they had signed up for until they heard the video begin backstage.

“I was so blown away by it, it was unreal,” said British model Abby Clee. “I knew I was definitely moved. I was a bit teary but thought, ‘No, I shouldn’t cry when I’m about to go out.’ I think a lot of people were quite moved, by their faces. Obviously, it means quite a lot to them.”