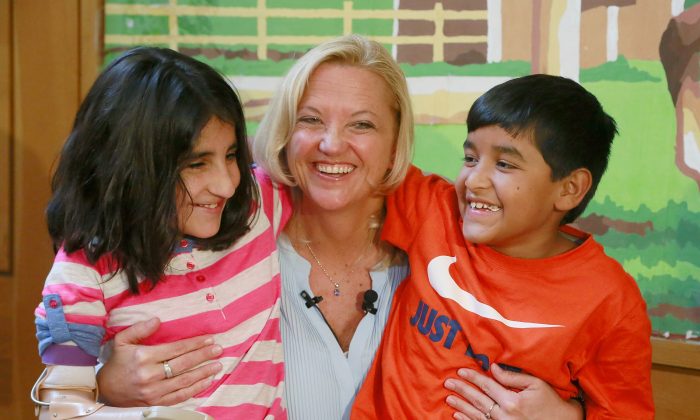 But when the nurse was reunited with them on Friday at Shriners Hospital For Children, she found two cheerful 8-year-olds who had learned to speak English and to walk and even paint with artificial limbs.

They looked “healthy and so grown up,” she said in a telephone interview.

In 2013, Abdul Wahid was working with his family in the garden of his home in a remote, war-torn area when a rocket exploded, killing his brother, taking his right leg and badly damaging his other leg.

Shah Bibi Tarakhail lost most of her right arm and her right eye when she mistook a discarded grenade outside her home for a rock, and it exploded, ripping her body with shrapnel and killing her brother.

The children were taken to a NATO hospital in Kabul. Austin, who at the time was a U.S. Army civil affairs officer, saw them there. She brought them a DVD player and some Disney movies, along with what comfort she could.

“Capt. Sam,” as she was known, also linked up with the nonprofit Los Angeles-based group Children of War and arranged for the children to be flown to Southern California for treatment and therapy. The children stayed with foster families.

On Friday Austin, who is now an operating room nurse in Virginia, finally saw the children again.

She received hugs, smiles, and even a drawing of a heart from Abdul.

“I love Sam and she’s a good lady…she was there for me always,” he said in a telephone interview.

“I’m happy when I see her,” Shah Bibi said. “I say thank you for everything: you take me outside, you take me inside, you tell me stories, give me candy.”

Austin remembered Abdul as “unwaveringly smiling and singing” in the Afghanistan hospital but he had a surprise for her.

“To see Abdul walk was amazing,” she said. “To see his smile again, and the joy that he has. His spirit is so good.”

As for Shah Bibi, she was traumatized and could barely talk, Austin said.

Now, Austin marveled, the girl not only spoke but has learned to skillfully paint with her prosthetic arm.

Both children have completed their treatments and are scheduled to return soon to their Afghan homes.

It won’t be easy for them.

“They’re going back to a war zone,” said Ilaha Omar, director of international outreach for Children of War.

Shah Bibi went home briefly last year but word of her painting aroused the wrath of militants. Word spread to her family that she would be killed for adopting Western ways, and for a time the family had to flee its small home on the Pakistani border.

“She actually is worried about getting killed. She doesn’t want to go back,” Omar said, but added: “Her family wants her back.”

“Now it’s time that she’s reunited,” Omar said. “But you know, we’re going to keep a close eye on her.”