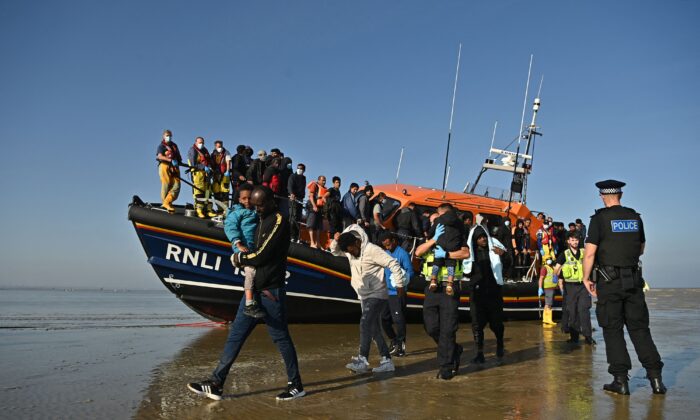 Illegal immigrants carry children as they are escorted to be processed after being picked up by a Royal National Lifeboat Institution lifeboat while crossing the English Channel at a beach in Dungeness, southeast England, on Sept. 7, 2021. (Ben Stansall/AFP via Getty Images)
UK

The number of illegal immigrants who have reached the UK this year by crossing the English Channel in small boats is now triple the total for the whole of 2020.

At least 886 people succeeded in reaching the UK on Saturday, the Home Office confirmed on Monday. This brings the total for the year to more than 25,600, according to available official data compiled by the PA news agency.

Illegal immigrant arrivals through the Channel in 2021 now stand at more than three times the number for 2020, when 8,417 people crossed the Dover Strait.

A Home Office spokesman said, “The British public have had enough of seeing people die in the Channel while ruthless criminal gangs profit from their misery and our New Plan for Immigration will fix the broken system which encourages migrants to make this lethal journey.”

The New Plan for Immigration, which was announced in March, was intended to make it more difficult for immigrants entering the UK illegally to stay in the country.

Despite government promises to stem the flow of small boats, however, the numbers this year have continued to eclipse those of previous years.

Immigration minister Tom Pursglove told MPs last week that just five illegal immigrants who crossed the Channel to the UK have been returned to Europe so far this year, citing difficulties in securing agreements.

Downing Street confirmed on Monday that a task force led by Cabinet minister Steve Barclay has been drafted in to support efforts to stem the rising number of people arriving on Britain’s shores.

Talking to Sky News on Monday, business minister Paul Scully defended the performance of Home Secretary Priti Patel, who has come under pressure from her Conservative colleagues, and blamed the failure on the French authorities.

“We’ve made an agreement with France which, unfortunately, is not being affected well enough at the moment, and that’s what we need to go back and do.”

Asked whether Prime Minister Boris Johnson thought France was doing enough to prevent Channel crossings, Johnson’s official spokesman said, “We continue to believe that there is more that can be done on both sides.”

“By working jointly, we have stopped more than 20,000 migrant attempts so far this year—400 arrests, 65 convictions,” he said. “But, absolutely, there is more that can be done to step up this enforcement.”

French President Emmanuel Macron told a newspaper last week that the British “oscillate between partnership and provocation” when discussing the immigrant crisis, but emphasised the two countries “need to further strengthen collaboration.”