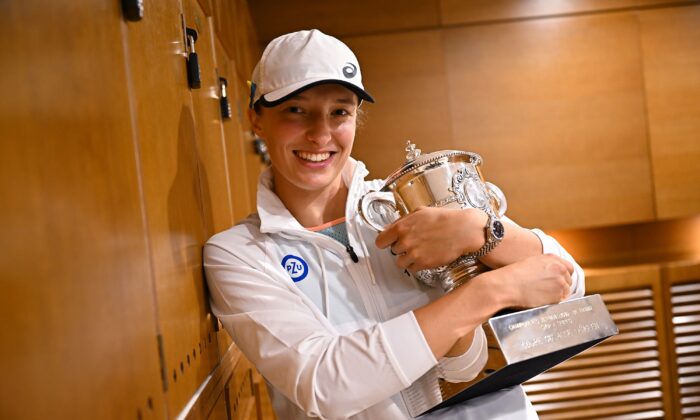 Iga Swiatek poses in the locker room with the trophy after winning against Coco Gauff of The United States during the Women’s Singles final match on Day 14 of The 2022 French Open at Roland Garros in Paris on June 4, 2022. (Corinne Dubreuil/Pool/Getty Images)
Tennis

Six-time and defending champion Novak Djokovic and French Open winner Iga Swiatek were announced Tuesday as the top seeds for the fortnight of Wimbledon, which began Monday in London.

World men’s No. 8 Andrey Rublev is also banned. On the women’s side, World No. 6 Aryna Sabalenka is also one of several players not allowed to compete.

World No. 2 Alexander Zverev of Germany is also out of the event after suffering an injury at the French Open.

In ladies’ singles, Anett Kontaveit of Estonia is the No. 2 seed followed by Tunisia’s Ons Jabeur, Paula Badosa of Spain and Maria Sakkari of Greece.

The Wimbledon singles draw will be announced Friday. Djokovic and Swiatek are the betting favorites to win.