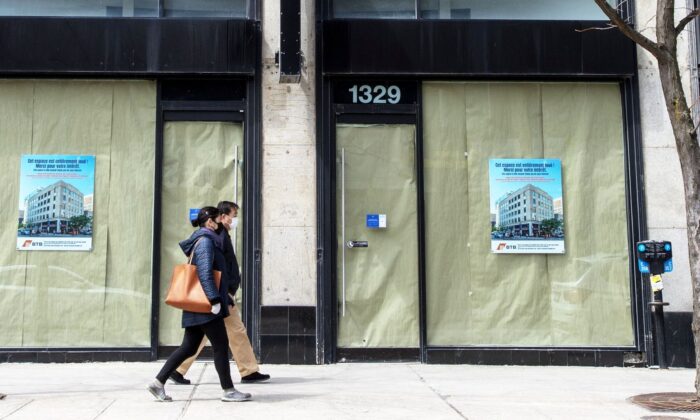 People walk past a closed business in Montreal on April 24, 2020. (THE CANADIAN PRESS/Ryan Remiorz)
Canada

‘Not Clear’ if Governments in Canada Learned Lessons on Economic Disruption of Pandemic Measures: Study

Measures imposed by different levels of government in Canada aimed at curtailing the spread of COVID-19 led to a fall in economic activity unprecedented since the Great Depression, according to a new study, which questions whether authorities have “learned any clear lessons” on how to prevent these types of disruptions in the future.

“In trying to put the pandemic behind us, it is not clear whether the federal and provincial governments have learned any clear lessons about how to deal with either a resurgence of COVID-19 or a new pandemic while minimizing disruption to the economy,” says the Fraser Institute study.

The study, published Sept. 14 and titled “Storm Without End: The Economic and Fiscal Impact of COVID in Canada,” found that the “most precipitous fall in economic activity” occurred roughly between January 2020 to January 2022.

The severe drop was followed by a rapid rebound and then gradual economic progress that extended into early 2022, it said. What ensued was a boom with excess demand, the lowest employment in nearly five decades, inflation, and current rising interest rates.

The Bank of Canada has increased its policy rate by 3 percent since March with more increases expected in October and December.

Di Matteo writes that the first wave of the pandemic had the most severe economic impact due to its novelty, the uncertainty surrounding it, and the absence of immunity or vaccines.

Closures led to a drop of 11 percent in real GDP in the second quarter of 2020, with rebounds of 9 percent and 2 percent in the third and fourth quarters of 2020.

Economic output ebbed with following waves and by the fourth quarter of 2021, real GDP was only 2 percent higher than two years earlier, “a sign of substantial foregone output,” Di Matteo writes.

He notes, however, that companies, employees, and citizens have shown resilience in the face of adversity.

“[T]he experience of the pandemic appears to have underscored the ultimate resilience and adaptability of firms, workers, and consumers in the Canadian economy as they adapted to the challenges of a new economic environment.”

The study also looks at how different provinces fared economically over the last two years.

It says that Alberta’s economy was the hardest hit with an estimated drop of 8 percent in real GDP in 2020, followed by Quebec and Newfoundland & Labrador at above 5 percent.

British Columbia and the Atlantic provinces fared better, with real GDP drops between 3 and 4 percent.

Quebec suffered the largest drop in employment at 19 percent by April 2020.

“The correlations between infections and deaths from COVID-19 and GDP and employment performance do not appear as important as that between the length and intensity of restrictions and poorer economic performance,” Di Matteo writes, adding restrictions were imposed mainly to address hospital capacity.

He says Ontario, which adopted some of the most stringent restrictions, was hit hard by a decrease in retail sales. Meanwhile, Alberta, which had fewer restrictions but a much higher COVID-19 case count, had the second-highest employment growth among the provinces.