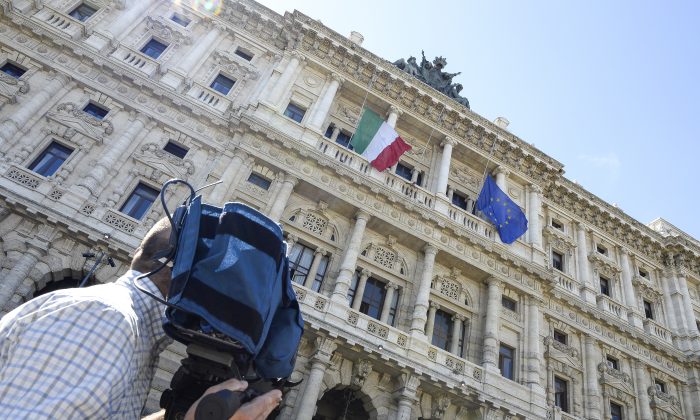 A cameraman makes a video recording in front of the Court of Cassation building, where the supreme court is set to decide whether to confirm a one-year prison sentence and a five-year ban from politics in a long-running tax fraud case involving former Italian Prime Minister Silvio Berlusconi's media business interests, on July 30 2013 in central Rome. The final appeal hearing began on Tuesday but one of Berlusconi's lawyers told reporters that the verdict may come only on Wednesday or Thursday. AFP PHOTO / ANDREAS SOLARO (Photo credit should read ANDREAS SOLARO/AFP/Getty Images)
Europe

Stealing Is Not a Crime If You Are Poor and Hungry, Rules Italian Supreme Court

Italy’s highest judicial court overturned the conviction of a poor man who stole food out of necessity.

During November of 2011, Roman Ostriakov—a homeless young Ukrainian man—paid for a packet of bread sticks at a supermarket in Genoa, Italy.

Another customer in the store reported that Ostriakov had unpaid items in his pocket: two pieces of cheese and a packet of hot dogs. The cost of which totaled around four euros ($4.68).

On Feb. 12, 2015, Genoa’s Court of Appeals upheld Ostriakov’s conviction of theft in the first degree. On May 2, Italy’s Supreme Court of Cassation overturned the decision.

“The event does not constitute a crime,” said the Supreme Court. “Those who, driven by need, steal small quantities of food in the face of the unavoidable necessity to nourish themselves, are not punishable.”

“The condition of the accused and the circumstances he was at the mercy of” stated the Supreme Court, “demonstrate that he required that food to face the immediate and unavoidable need to feed himself.”

It was not Ostriakov who submitted the appeal, but Genoa’s Attorney General Antonio Lucisano, who requested a lighter sentence for the young beggar, but was denied by the Genovese tribunal. Since Ostriakov was apprehended before leaving the shop’s premises, Lucisano wanted the charges dropped from theft to attempted theft.

Originally, Ostriakov was sentenced to six months in prison and recieved a 100 euro fine ($115 dollars).

Ostriakov has previously been driven by hunger to steal. These prior theft convictions, all of low costing food items, are believed to be the motivation for the Genovese court’s “severe” punishment.

Writing for Corriere della Sera, Goffredo Buccini lamented the fact that it took three judicial courts to decide that “the event does not constitute a crime.”

The Italian Supreme Court of Cassation’s ruling is definitive and cannot be overturned.