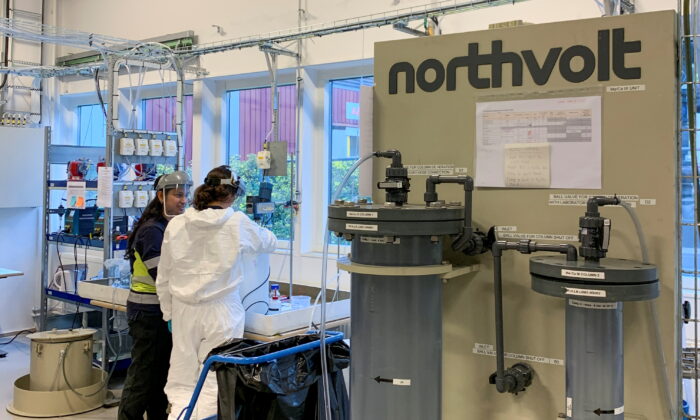 Swedish battery developer and manufacturer Northvolt has assembled the first “homegrown” lithium-ion battery cell for electric vehicles at a Skellefteå gigafactory, the company announced on Wednesday.

In a statement, the company said the battery marks a “new chapter in European industrial history,” as the cell is the first to have been “fully designed, developed, and assembled at a gigafactory by a homegrown European battery company.”

The term gigafactory is a combination of the word “factory” and “giga,” a unit of measurement representing billions. Coined by Tesla founder Elon Musk, the word refers to the large-scale manufacturing facilities that produce batteries for electric vehicles (EVs).

Northvolt has been working on assembling the battery since the gigafactory was announced in 2017. The battery cell came off the production line at the factory on Tuesday, Northvolt said, adding that “commissioning and upscaling of the factory will continue through into 2022.”

It also expects to deliver the lithium-ion battery cells to customers through next year, noting that production capacity at Northvolt Ett will increase toward 60 GWh per year to fulfill over $30 billion worth of contracts Northvolt secured from key customers.

“To these customers in the automotive, industrial and energy storage sectors, Northvolt Ett will deliver cells of varying formats with commercial deliveries beginning in 2022,” Northvolt said.

“Today is a great milestone for Northvolt which the team has worked very hard to achieve. Of course, this first cell is only the beginning. Over the course of the coming years, we look forward to Northvolt Ett expanding its production capacity greatly to enable the European transition to clean energy,” Peter Carlsson, CEO and Co-Founder of Northvolt, said.

Currently, the majority of the world’s electric car batteries are produced in the United States and Asia, with China forecasted to produce around 13 million battery electric vehicles (BEV) and plug-in hybrid electric vehicles (PHEV) by 2023.

That figure is more than any other nation worldwide and exceeds the anticipated production levels of other large markets in the United States, Germany, and Japan.

Tesla, founded by Elon Musk, has gigafactories in California, Nevada, and Shanghai, and is currently building a plant in Berlin-Brandenburg. The latest plant is expected to manufacture hundreds of thousands of Model Y vehicles and millions of battery cells, as per Tesla.

Backed by Volkswagen, Scania, the European Commission, and Spotify founder Daniel Ek, Northvolt has raised billions in funding. Volkswagen took a 20 percent stake in the Swedish battery company and invested $620 million into Northvolt earlier this year.

In June 2019, Volkswagen had already invested $1 billion in Northvolt.