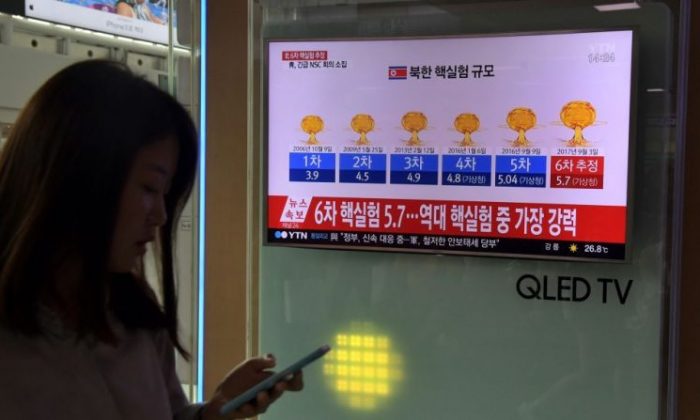 A woman by a television display at a train station in Seoul on Sept. 3, 2017. The news broadcast has graphics of the history of North Korean nuclear tests after news Pyongyang had conducted a sixth test. (Jones/AFP/Getty Images)
Asia & Pacific

The nuclear bomb North Korea tested early this month exploded with double the power than first estimated, a monitoring group said, generating  about 17 times more energy than the nuke that destroyed Hiroshima.

The communist regime in North Korea tested its sixth and biggest nuclear device on Sept. 3 and described it as a hydrogen bomb that can be fitted on a missile capable of reaching the United States.

The estimates for the power of the explosion ranged from 50 kilotons to 160 kilotons. That estimate has been revised to approximately 250 kilotons by 38 North, a monitoring group run by the U.S.-Korea Institute at the Johns Hopkins School of Advanced International Studies.

That’s roughly 17 times more powerful than the bomb that devastated Hiroshima, which had a yield of 15 kilotons.

For years Kim has continued to pursue a nuclear weapon capable of reaching the United States—despite widespread opposition from world leaders, several rounds of increased sanctions, and widespread famine and destitution affecting the majority of North Korea’s people.

The sixth nuclear test registered on earthquake monitoring equipment with readings ranging from 5.8 to 6.3 in magnitude. The U.S. Geological Society gave the 6.3 reading, while CBTO and NORSAR gauged it at 5.8.

CBTO and NORSAR have since revised their estimates to 6.1, causing 38 North to revise the estimated power of the nuclear blast to 250 kilotons.

The original estimate by South Korea was 50 kilotons. Meanwhile, the United States estimated the power of the blast at 140 kilotons and Japan at 160 kilotons.

North Korea is the world’s latest example of a nation in the grip of late-stage communism with a network of gulag-like labor concentration camps where hundreds of thousands of people are feared to have perished.

The United States and South Korea continued to highlight their military strength on Wednesday. Defense Secretary Jim Mattis is in North Dakota surveying a portion of the U.S. nuclear arsenal. Meanwhile, South Korea conducted a live-fire drill of a pre-emptive strike on the North.