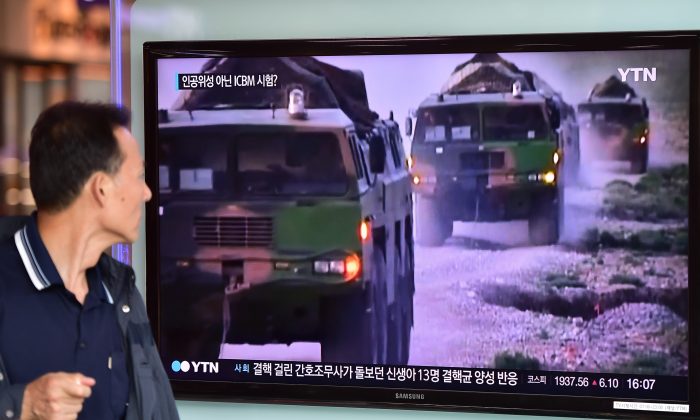 A man watches a news report at a railway station in Seoul on Sept. 15, 2015, on the confirmation from North Korea that the Yongbyon nuclear reactor seen as the country's main source of weapons-grade plutonium had resumed normal operations, raising a further red flag amid growing signs the North may be considering a long-range rocket launch next month in violation of U.N. resolutions. North Korea mothballed the Yongbyon reactor in 2007 under an aid-for-disarmament accord, but began renovating it after its last nuclear test in 2013. (Jung Yeon-je/AFP/Getty Images)
Opinion

North Korea’s announcement that “normal operation” was again underway at its Yongbyon reactor complex sent a characteristic wave of anxiety through the world’s Pyongyang watchers. The country’s nuclear ambitions had, after all, been largely forgotten in what seemed like a lull in North Korea’s fractious relations with the wider world.

Even as the Korean Peninsula itself endured a summer of high tension, the West’s complicated fear of North Korea has been displaced by a myopic public narrative currently fixated on the European refugee crisis, the murderous idiocy of ISIS, and the travails of Donald Trump.

Things are clearly rather different on the inside. The regime’s primary tool of geopolitical leverage can have slipped nobody’s mind—and North Korea’s recent statements speak volumes about how the Kim regime conceives of its nuclear program.

In North Korea’s worldview, nuclear capability is the only thing that can ward off the chaos and collapse that befell Iraq, Libya, and Syria.

Back to the Byungjin Line

In North Korea’s worldview, nuclear capability is the only thing that can ward off the chaos and collapse that befell Iraq, Libya, and Syria. As the recent statement put it, these weapons are a “measure for self-defense in the face of the U.S. extreme hostile policy and nuclear threats toward it.”

The highest echelons of North Korea’s bureaucracy have seen the footage of erstwhile ally Moammar Gadhafi being brutalized and killed in the dust and dirt. None of its institutions or leaders have the slightest intention of repeating his experience.

The Kim regime thinks this should be obvious. If anything, North Korea’s statement of Sept. 15 expresses an incredulity that Pyongyang’s position is not understood elsewhere.

North Korea’s nuclear tests of 2006, 2009, and 2013 at Pungyye-ri birthed an ideological and developmental theme known as the ‘Byungjin Line.’

North Korea’s nuclear tests of 2006, 2009, and 2013 at Pungyye-ri birthed an ideological and developmental theme known as the “Byungjin Line,” best translated as parallelism.

This concept essentially holds that North Korea’s unencumbered technical, political, and social development could only be achieved under the protective umbrella of nuclear capability and research. In the supposed recent nuclear hiatus, some analysts thought the Byungjin Line had all but faded away—but now, with Yongbyon restarted, it’s suddenly returned.

The restart is, the statement said, “pursuant to the line of simultaneously pushing forward the economic construction and the building of a nuclear force advanced at the historic plenary meeting of the Central Committee of the Workers’ Party of Korea” (WPK).

The rest of the world generally views plenary meetings of the WPK’s Central Committee with bemusement and scorn. But by reiterating the relevance of this particular meeting, and restating the Byungjin’s parallelism, the statement should remind us that the memory of such meetings has weight—and that North Korea’s institutional outlook is far from the myopic charade observers often mistake it for.

From Party Foundation to Nuclear Capability

Pyongyang takes an extraordinarily long view when it comes to historiography; North Korea’s self-narrative is replete with commemorative moments and necessary articulations. And the reappearance of Yongbyon is perhaps much less surprising when taken as part of North Korea’s commemorative plans for 2015.

Accordingly, Kim Jong Un’s 2015 New Year message laid out North Korea’s entire developmental and bureaucratic year around a moment of memorial—and not just any moment. Pyongyang has already marked the passing of Liberation Day on Aug. 15, and the Day of Songun on Aug. 25, but a far more important moment awaits: the 70th anniversary of the founding of the WPK, to be marked on Oct. 10.

Just as North Korea’s governance structure does not represent a truly singular dictatorship but instead pits institutions and agendas against each other, its narrative and commemorative systems are far from monolithic. Instead, they are generated and transmitted by multiple nodes of charisma and authority.

The activity at Yongbyon and its announcement by KCNA are just as crucial a pillar of Pyongyang’s legitimacy.

The activity at Yongbyon and its announcement by the Korean Central News Agency (KCNA) may or may not be directly connected to the no doubt enormous celebrations that are planned, but they are just as crucial a pillar of Pyongyang’s legitimacy.

While the WPK’s soon-to-be-celebrated birthday will refresh the revolutionary political atmosphere in which North Korea’s regime and system can breathe, Pyongyang’s military and technological infrastructure, including the Korean People’s Army (KPA) and its attendant nuclear capacity, is designed to safeguard North Korea’s patch of the geopolitical terrain.

Viewed in this light, North Korea’s “treasured swords” of nuclear mastery are far from the height of geopolitical folly. They are instruments of protection and shared ownership, guaranteeing both the past and future of all both at home and abroad. So it’s only natural that a little saber-rattling is in order now and then.

Robert Winstanley-Chesters is a postdoctoral fellow of the Beyond the Korean War Project at the University of Cambridge in the U.K. This article was previously published on TheConversation.com