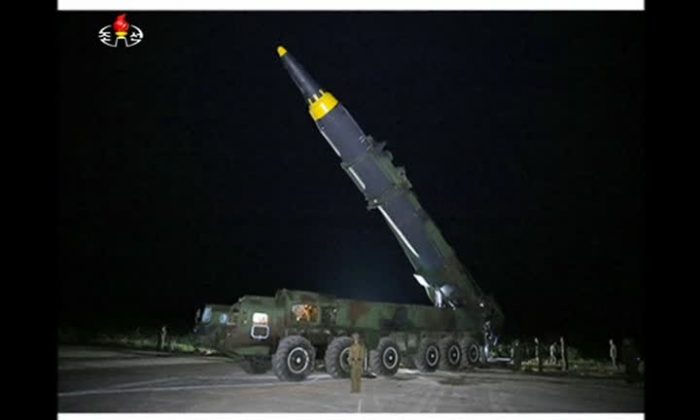 A North Korean intermediate-range ballistic missile Hwasong-12 is shown prior to launch from a vehicle. (screenshot)
Asia & Pacific

North Korea’s military parades have inspired many laughs in the past among weapons experts. They have featured soldiers carrying World War II-era weapons, special forces troops with non-combat sunglasses, and mobile missiles with their warheads on crooked.

Yet the weapons programs of the communist regime aren’t as backward as some would imagine—and this is mainly due to weapons and technologies it has obtained from other nations, which have helped jump-start its nuclear programs.

When North Korea recently fired ballistic missiles over Japan, it released images showing a Transporter Erector Launcher (TEL) that was provided by the Chinese regime. Reuters reported that the first launch was likely from a TEL. These launchers are nothing to scoff at, as they are technologies that even the United States has not developed for intercontinental ballistic missiles.

“These TELs are actually critically important. Without them, the North Koreans would not be able to launch surprise nuclear attacks on the United States or our allies,” said Richard Fisher, a senior fellow with the International Assessment and Strategy Center.

By supplying North Korea with the launchers, Fisher said, the Chinese Communist Party had a “direct hand in helping North Korea to have the capability to launch surprise nuclear strikes.” He noted that when China shipped the TELs to North Korea around 2011, the exchange was monitored by Japanese, South Korean, and North American satellites.

“We don’t have the larger 16-wheel TELs that Russia, China, North Korea, or Pakistan have for their missiles,” he said.

According to Fisher, while North Korea has not yet been able to place an intercontinental ballistic missile (ICBM) on a TEL, it did display a TEL capable of this during a recent parade, with a placeholder cold-launch tube loaded on top.

“The solid fuel three-stage ICBM from North Korea is not quite ready, but by putting the tube on top of the TEL, the North Koreans are telling us they’re on the way,” he said.

North Korea isn’t conducting its tests of nuclear weapons and ballistic missiles in a haphazard manner. Its tests have instead followed a clear course.

According to Willliam Triplett, a veteran of the Reagan White House and the American intelligence community, the North Korean regime released a critical image after the launch from a TEL of a missile that flew over Japan, showing its missile crew standing on the TEL after the weapon had been fired. This suggests, he said, that the TEL was able to survive the launch.

Triplett said, “If in fact they now have the capability to run these things over highways and just stop and shoot at that moment, that makes it much more difficult for us to take them out.”

He noted the latest launch is part of a series of developments that North Korea appears to have made, and this pattern also shows what its next plans likely are.

Watching the developments in North Korea, he said the next logical step would be for it to test a hydrogen bomb in the ocean, then to launch a missile from a submarine.

North Korean dictator Kim Jong Un has already said he plans to test a hydrogen bomb in the Pacific Ocean, although Triplett said the new sanctions on North Korea that President Donald Trump pressed for may damage its plans.

If North Korea is able to move forward with the test, however, Triplett said, “Then the next step of course is a submarine launch—then take it off the coast of Baja California.”

North Korea already has several Soviet-era submarines, including models capable of firing ballistic missiles. It is currently developing its own versions of these submarines.

It acquired these rusted Soviet submarines in the 1990s, and they included Golf Class submarines. Fisher noted this model was capable of launching up to three submarine-launched ballistic missiles, and at least one of them was still loaded with its ballistic missiles.

“North Korea could have also worked very hard to copy or to reverse engineer the Russian ballistic missile launching submarine, but in addition, China had the last Golf submarine in service until around 2012, and had 30 years of experience maintaining and upgrading that submarine,” he said.

Fisher noted that China’s history of supporting North Korea could mean the Chinese Communist Party has aided North Korea’s development or restoration of its submarines.

North Korea, he said, is reportedly close to launching two larger-class ballistic missile submarines, possibly 3,000-ton submarines, which could be the same size as the Soviet Golf class.