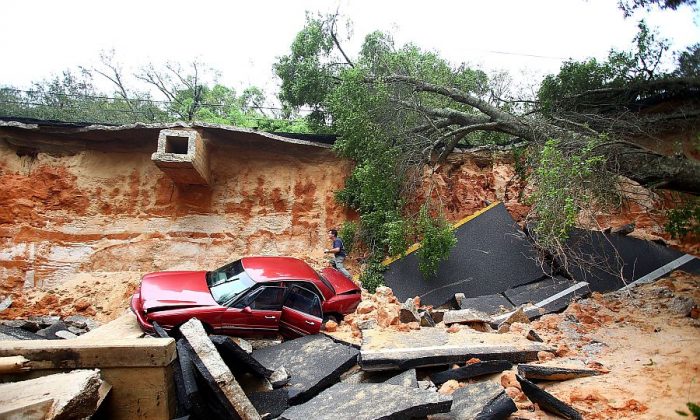 The damage on Scenic Highway after part of the highway collapsed following heavy rains and flash flooding in Pensacola, Fla., on April 30, 2014. (Marianna Massey/Getty Images)
Opinion

‘Noah’: We Caused the Flood

Darren Aronofsky’s film ‘Noah’ sends a clear message: take care of the Earth or the consequences will be fatal

While the biblical story of Noah is vague on God’s reasoning for wiping out humanity, Darren Aronofsky’s film adaptation makes it clear: ecological devastation.

Even though the story of the Great Flood appears in Greek mythology and The Epic of Gilgamesh, the biblical version is perhaps the most widely known. In Genesis, God tells Noah that he plans on ridding the world of wickedness and sin by sending a colossal flood to destroy humanity. Noah is instructed to take his wife, his three sons and their wives, and one male and female of every living creature and build an ark. There, as God instructs them, they will wait out the flood. Once the waters retreat, they are to begin humanity again.

Aronofsky, a humanist, bases his film on this premise. But save for a few biblical references, that’s where the similarities end. While the biblical story of Noah is vague on God’s reasoning for wiping out humanity, Aronofsky’s “Noah” makes it clear why the Creator (as he is known in the film) is going to destroy the earth: ecological devastation. So it’s no surprise that the movie has ruffled the feathers of some conservative Christians.

As in the Bible, the film traces the problem back to the fall of man. Adam and Eve, the first humans, had three sons: Cain, Abel, and the lesser-known Seth. Cain kills Abel, leaving two lineages of descendants—those of Cain and those of Seth.

Aronofsky’s “Noah” depicts the descendants of Cain as violent, meat-eating pillagers of the earth who no longer serve the Creator. At the beginning of the movie, all of earth’s resources have been depleted, and human beings have fallen into starvation and destitution. The descendants of Cain have built unsustainable cities and hunted animals to near-extinction.

The protagonists of this film are Noah and his family—his wife; their sons Shem, Ham, and Japheth; and a young girl they rescue who will later become Shem’s wife. Unlike the descendants of Cain, these descendants of Seth still follow the word of the Creator. Noah and his family eat a meatless diet and are strict environmentalists. In one scene, Noah chastises Ham for picking a flower. They are of the earth and are meant to stay there, Noah explains, so that when the wind blows, the seeds will take them far away so that more flowers will grow.

As society spirals out of control, Noah witnesses two jarring events. The first is a lamb being thrown into a crowd and subsequently torn apart by people hungry for the taste of meat. The second is a man so desperate for food that he sells his young daughter for a hunk of meat to gnaw on. It’s hopeless. Society has devolved into complete madness and utter chaos.

Noah then dreams of earth’s impending doom, interpreting the dream as a command to build an ark and save all the innocents—namely the animals. Noah even believes that as humans, he and his family must perish too. Since he failed to find wives for his two younger sons, he believes that the Creator wants his family to be the last men on earth. After they die, the animals can roam free in a bountiful, human-free planet. It raises the question: would our planet be better off without us?

If the apocalyptic chaos at the outset of “Noah” sounds familiar, it’s because it’s happening this very minute in nearly every part of the earth. Today, humans are causing extensive damage to our planet at an alarming rate. We’ve built huge, industrial cities that produce enormous amounts of waste. We’ve deforested our lands and overfished our seas. And we’ve polluted the ecosystem so much that global temperatures are rising, bringing about extreme weather and—like Noah’s flood—causing the seas to rise.

“Noah” is nowhere near perfect—its all-white cast seems at best historically inaccurate for a movie set in biblical times. But revisionist aspects aside, the striking parallels made between the descendants of Cain and us, the planet’s inhabitants today, can’t be ignored. While international scientists have released countless reports about climate change, we’re not doing enough to combat it effectively. An alarming number of elected officials in the United States continue to deny its very existence.

The world’s poor have already begun to feel the effects of rising sea levels and crushing droughts. If we don’t begin to make drastic changes to avert the worst damage from climate change, we’ll soon be living in a debased society like the descendants of Cain.

The movie sends a clear message: take care of the earth or the consequences will be fatal. However, we probably won’t need a higher power to destroy us—we’re already doing that on our own.

Nathalie Baptiste is a Haitian-American contributor to Foreign Policy In Focus who lives in the Washington, D.C., area. You can follow her on Twitter at @nhbaptiste. This article previously published at fpif.org.