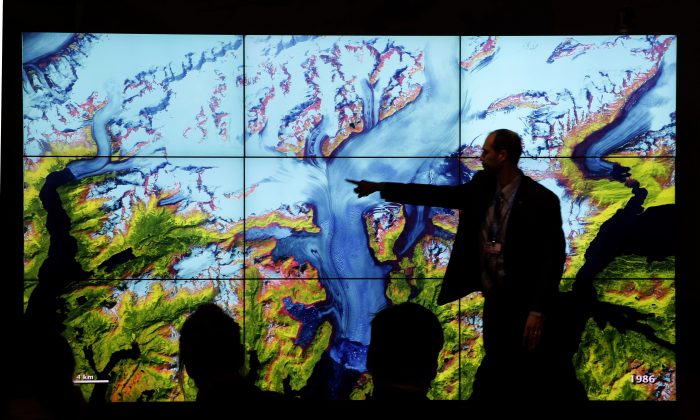 Just ahead of the Paris climate talks in 2015, a groundbreaking paper was published by the U.S. National Oceanic and Atmospheric Administration (NOAA). It provided major support for the theory that carbon emissions are causing climate change, dispelling some previous doubts in the scientific community that this is the case. One of the scientists who worked extensively on the data used in the study came forward this month to blow the whistle on what he says was a rush job that made the results unreliable.

John Bates is a recently retired high-level climate scientist at NOAA who handled its climate data; he was even awarded a special honor from the Obama administration for his work to create standards for that data. In a Feb. 4 blog post on the website of climatologist Judith Curry, Bates said NOAA scientists ignored proper procedures for handling data and used methods that may have skewed the results of their 2015 paper, now widely known as the “Karl study,” named after its lead author, NOAA’s Tom Karl.

The problems in procedure, Bates said, may have made it seem that the planet is warming more quickly than it is. This is important because it would contradict an earlier finding by U.N. scientists that showed that global warming had slowed down from 1998 to 2013.

This so-called “hiatus” seemed to show that, even as carbon emissions rose in the world, climate change slowed down, calling into question the causal link between the two.

The Karl study, published in the journal Science, showed there was no hiatus. On the contrary, there was a rapid rise in global temperatures.

The debate is highly technical and open to misinterpretation, making it hard for a lay audience to draw conclusions.

The debate is highly technical and open to misinterpretation, making it hard for a lay audience to draw conclusions.

An article published in the U.K.’s Daily Mail on Feb. 4, featuring an exclusive interview with Bates, added extra bite to the controversy. It was titled “How world leaders were duped into investing billions over manipulated global warming data.”

The Karl study was widely cited by then-President Barack Obama and other leaders meeting in Paris to rally support for climate change mitigation. Bates accused Karl of having his “thumb on the scale pushing for, and often insisting on, decisions that maximize warming and minimize documentation.”

Karl did not respond to inquiries as of press time.

The Daily Mail also suggested this could be a second “Climategate.”

The first “Climategate” involved a batch of internal emails among climate scientists that were published in 2009. Some said the emails showed there was an attempt to cover up data that didn’t fit in with the human-made climate change theory.

The scientists involved, however, said that the publicized excerpts from those emails were taken out of context and skewed. They said they were simply discussing standard methods of data adjustment needed for accuracy.

The Trouble With Climate Data

If nothing else, Bates’s allegations may cause scientists to take another look at how data is handled and adjusted in climate science.

Briefly, some of the criticisms Bates voiced against the data in the Karl study include: (1) known bugs in the software researchers used to analyze land temperature data; (2) the data didn’t go through verification procedures Bates helped to develop for NOAA’s Climate Data Record; (3) it was not archived in a form that would allow others to easily review and replicate it; and (4) adjustments were made to ocean temperature data to even out discrepancies between various readings and this may have introduced inaccuracies.

Bates began his blog post: “I read with great irony recently [in the Washington Post] that scientists are ‘frantically copying U.S. Climate data, fearing it might vanish under Trump.’ As a climate scientist formerly responsible for NOAA’s climate archive, the most critical issue in archival of climate data is actually scientists who are unwilling to formally archive and document their data.”

Kevin Trenberth, a senior climate scientist at the National Center for Atmospheric Research, said via email: “Proper versioning of datasets and documentation has always been an issue. For many years, scientists have called for a climate observing system … and inadequate funding has compromised this goal.”

He said, however, that some of the Climate Data Record procedures touted by Bates as necessary for ensuring the reliability of data “are very pedantic. It is not surprising if shortcuts are taken.” He added, “There is always a trade-off between doing productive things and bureaucratic things.”

Even if the data didn’t go through the review process Bates called for, it wasn’t without its checks and balances, say defenders of the Karl study. It was also peer-reviewed by the journal Science.

Jeremy Berg, biochemist and editor-in-chief of the Science family of journals, said in an email that “Science stands behind its handling of the paper by Karl et al., which underwent particularly rigorous peer review.” He said the review of this article took six months and Bates’s suggestion that it was rushed is unfounded. Bates’s charge that is was a rush job is based, however, on the shortcuts allegedly taken to avoid NOAA’s lengthy internal procedures for data verification.

Science will await the results of NOAA’s investigation into Bates’s concerns and will “review the results and consider our options,” Berg said.

A NOAA spokesperson confirmed that the administration will investigate. “NOAA takes seriously any allegation that its internal processes have not been followed and will review the matter appropriately.”

Bates and his critics agree in general that climate datasets are moving targets. This is one of the fundamental reasons there’s so much debate over what the data means.

Refining datasets is a constant process, said Trenberth and others commenting on Bates’s criticisms. “Datasets are dynamic, always being updated. This is especially the case for the global temperatures. It is never done (mature),” Trenberth wrote.

But, he said, it isn’t a reason to dismiss data that has been published in a peer-reviewed journal and supported by other research.

One of the most prevalent points raised by those defending the Karl paper is that the data questioned by Bates was confirmed by Zeke Hausfather, a climate scientist and energy systems analyst at Berkeley Earth. Hausfather’s research, published in Science on Jan. 4, showed an even greater rise in temperatures than the Karl paper.

Curry noted that Hausfather’s data did show a 12.7 percent greater rise in temperatures from 2000 to 2015 than the Karl paper.

However, the uncertainty in adjustments made to climate data—data that is fundamental to understanding climate change—opens that data to bias, she said.

“The bottom line is that sea surface temperature datasets are a moving target,” Curry said.

The arguments for and against Bates’s objections are many; only a few have been touched on here.

The U.S. House of Representatives Committee on Science, Space, and Technology, chaired by Rep. Lamar Smith (R-Texas), has expressed clearly its support for Bates. Smith stated on the committee’s website that NOAA has “fought transparency and oversight at every turn.”

Smith said, “I thank Dr. John Bates for courageously stepping forward to tell the truth about NOAA’s senior officials playing fast and loose with the data in order to meet a politically predetermined conclusion.”

Bates suggested one way to prevent future uncertainties in climate data would be to reintroduce and pass the OPEN Government Data Act. This would require datasets to be archived and made easily accessible to others wishing to review and replicate them.

The Senate passed the act, but the House didn’t. Bates hopes to see it reintroduced in the new Congress.