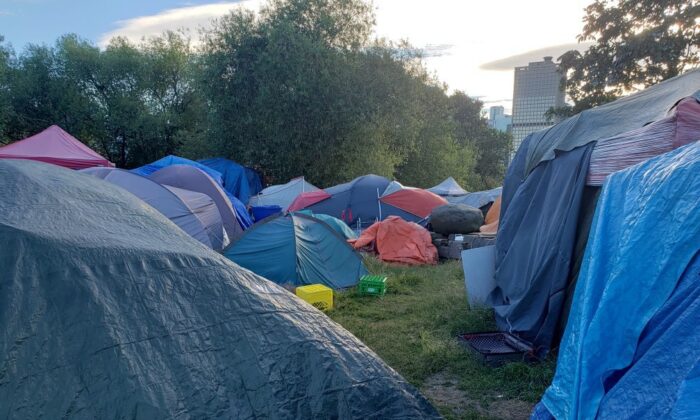 VANCOUVER—Residents living near a homeless camp in Vancouver’s Downtown Eastside are speaking out as they question how much longer the camp will occupy the area. Meanwhile, advocates for the homeless point to the encampment as an example of political inaction in response to a problem that has needed attention for years, as some pundits question long-term government policy direction.

The camp of approximately 80 tents is now in Crab Park, its fourth location after being evicted from Oppenheimer Park in 2020, a nearby parking lot shortly afterward, and eventually Strathcona Park in May 2021. The current site looks more permanent, as a court ruled in January this year that the encampment can remain because the city doesn’t offer enough alternative housing or shelters to meet the needs of those living in the tents.

Luke Hurdle told The Epoch Times he has lived in the neighbourhood for almost seven years and has seen the situation erode during that time.

“This has become a real issue that you can’t sweep under the rug for very much longer,” Hurdle said.

“If you are homeless, then you should be able to have some type of shelter in this area, a place to properly go to the bathroom, proper showers or something if they want to get cleaned up. There’s no amenities for these people. And the drugs have definitely changed the way that the people are, and it spreads so quickly.”

He adds that he believes the city has had enough time to deal with the issue, but it hasn’t.

“It’s only gotten worse,” he says.

Another local resident, John Steil, echoes Hurdle’s observations, saying there’s a lack of political will to address homelessness, addiction, and other poverty-related issues, particularly as it can be too controversial to make meaningful decisions. He said he’s even had politicians at his home to discuss the issues, but they seem emboldened to stick with the same approach.

“What they have been doing doesn’t work, and I think that’s pretty clear,” Steil said in an interview. “All politicians at every level point the finger at everybody else and say it’s so complex and we need to collaborate. But nobody collaborates, and the reason there’s no collaboration is there is no leadership.”

Steil suggests that long-standing land-use policies have hindered affordable housing development in the area. He notes that BC Housing congregates into a single neighbourhood what little accommodation they do provide, dumping everyone who has addiction and mental health challenges into the Downtown Eastside, which ensures the problems become intertwined and more hopeless. Yet despite the area’s deterioration and growing citizen concern, Steil said that the problem festers while each political party digs in with its own philosophy.

“Everything is so ideologically driven these days that people can’t work together and find solutions, and it’s just really sad.”

Many activists have been devoting their time to aiding the homeless in Vancouver. Sarah Blyth is the founder and executive director of the Overdose Prevention Society, an outreach organization created in 2016 that has grown to three locations seeing 900 people a day.

Blyth and her team work to provide a range of help to the homeless, from providing first aid to feeding the hungry to rescuing people who have overdosed. And part of the problem, she told The Epoch Times, is how people and politicians view the situation from a distance and are unable to craft policy or help in more fruitful ways.

“There’s so much stigma attached to homelessness from the outside that the support doesn’t come in the way that it’s needed, and judging isn’t going to help anybody,” she said.

“We need to help people where they’re at. Just because we say, ‘stop using drugs,’ they’re not going to stop using drugs. If we try and put people into rehab that aren’t ready for it, they just come out and they are the ones most at risk of dying.”

The most familiar face among the Crab Park tents is Fiona York, a part-time social worker who has dedicated her time to volunteering to help people in the camp since it was at Oppenheimer Park in 2018. She organizes meal plans, secures donations, oversees camp cleanliness, picks up prescriptions, helps with the court case, and tirelessly advocates for the people living in the park. She doesn’t pretend the situation is perfect but believes the court decision was pivotal in securing rights that the homeless didn’t have before.

“They have the right to housing, the right to access public space, and this camp is the first legally designated space in a park that’s ever been set in all of Canada. So [now there’s the] understanding there’s this precedent and this potential to actually get bylaws changed across B.C., and then even a charter challenge for housing for all of Canada.”

Norman Hall and his wife recently set up a tent in Crab Park after travelling to Vancouver from Montreal. He told The Epoch Times he is hoping to buy a recreational vehicle and live on the Sto:lo First Nation territory in Chilliwack, about 100 kilometres east of Vancouver. Hall, 67, said his wife isn’t comfortable staying overnight in the camp.

He said Vancouver housing is far too expensive and unattainable. “Here, even the subsidized hotels are crappy. And then you’re still paying $800 for a room with no fridge or nothing in it except cockroaches,” he said.

‘We Didn’t Get Into this Mess Overnight’

David Leis, VP of development and engagement with the Frontier Centre for Public Policy, blames years of poor government strategy and management for the increase in homelessness, addiction, and residual impacts on the surrounding communities. He cites reckless housing policies, negligent treatment toward the mentally ill, and a movement toward harm reduction protocols as the catalysts for the growth of Vancouver’s poverty problems.

“We didn’t get into this mess overnight,” Leis said in an interview.

“B.C., and Vancouver in particular, is the poster child for bad land-use policy. Housing costs are among the most expensive in the world, and this is a direct result of our emphasis on preserving land over people. Number two is we have a well-intended policy in the Lower Mainland to deinstitutionalize mental health patients into the community,” he noted.

“And the whole harm reduction movement has been an utter disaster,” he adds “It’s not about helping people—it’s about helping these policy-makers feel good about themselves.”

According to the January court decision by Justice Matthew Kirchner, Vancouver’s Parks Board could reapply for an injunction to have the camp removed “if there is a significant change in circumstances at the encampment, including if dangerous or life-threatening circumstances should develop, if the encampment grows larger and substantially more challenging to manage, or for significant reasons of health, safety, or public nuisance.”

In May, a man was charged with second-degree murder after another man died in the camp from a stabbing. However, the Parks Board voted against applying for an injunction.

The Epoch Times reached out to all Parks Board members requesting comment, but no one responded.