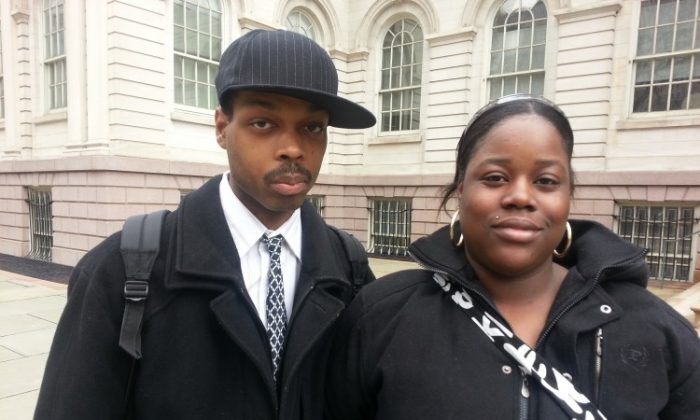 Trisha and Jerome Stevenson, who were displaced from Far Rockaway, Queens, by Hurricane Sandy, and are still living in a hotel in Manhattan. (Zachary Stieber/The Epoch Times)
US

No Housing Recovery for NYC Sandy Victims Until May

NEW YORK—Hundreds of millions of dollars are coming to help the thousands of families still displaced from Hurricane Sandy, but they won’t arrive until at least early May.

While it’s difficult to get a sense of how many people remain without stable housing after the severe hurricane, there are at least a few thousand families still displaced, according to Councilman Erik Martin Dilan, chair of the City Council’s Housing and Building Committee. Nine hundred families remain in FEMA housing.

Independently, the Coalition of the Homeless estimates well over 2,000 families displaced by Sandy are still without stable housing.

The city is already assured $720 million for housing recovery from the federal government, but that won’t likely be dispersed until early May, Brad Gair, director of the Mayor’s Office of Housing Recovery Operations, told the City Council.

Sandy wreaked damage across the city and particularly in areas far from Manhattan that have more low-income people and housing projects. The office estimates as many as 60,000 residential units were damaged by Sandy, with over 900 units (more than 800 buildings) being decimated or otherwise beyond repair.

Following past disasters, recovery programs failed to properly give homeowners and landlords accurate estimates for repairing their homes and buildings. In response, the agency is proposing to begin with accurately defining the cost.

Trisha and Jerome Stevenson, and their two children, 1 and 4, are one of the families whose home was destroyed. Before Sandy, they were living with a relative in Far Rockaway. After a hectic period of time immediately after Sandy, which struck in late October—the family was at the York College emergency shelter, then moved to another hotel—they’re now staying at the DoubleTree Hotel in Manhattan waiting for something more permanent to become available.

Mr. Stevenson said he spends most of his day looking for a job but the couple also watches the smaller child and takes the older one to school in Queens each day.

Many of the problems the Stevensons have dealt with are being worked on by the city. They have gotten few answers from a range of organizations and government agencies, and are still unsure what’s going to happen next.

“Instead of sending families on goose chases … all the available housing options need to be at one place,” said Christine Quinn, speaker of the City Council.

The Office of Housing Recovery Options has staff canvassing neighborhoods to find people who need housing help, and will hold open houses in areas that were most impacted by Sandy in March, teaming with other city, state, and federal agencies. The hardest hit areas were the Rockaways, parts of Staten Island and Coney Island, Red Hook, and the South Street Seaport.

Some of the problems stem from the office just being set up in November and starting from scratch with 3,000 workers, said Brad Gair, the director.

“Imagine starting a company like that, where you already have 15,000 customers lined up,” he said.