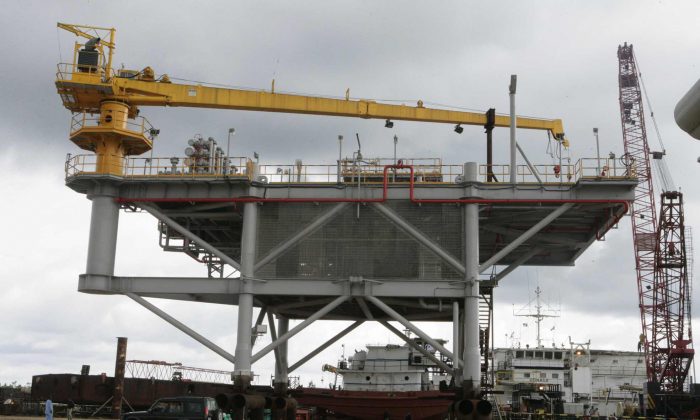 The Mejiriser platform located in Ogbogoro community, on the outskirt of Port Harcourt, appears on Oct. 12, 2006, as it was inaugurated by then Nigerian President Olusegun Obasanjo near the southern oil city of Port Harcourt. The nation's first floating flow station—built by the local firm Transcoastal Woas at a cost of $3.1 million—is a joint venture project between state-run Nigerian National Petroleum Corporation (NNPC) and Chevron. The four-legged platform, looking like a bridge, with 520 metric tons topside, has a production manifold and two hydro-carbon drain vessels. (Wole Emmanuel/AFP/Getty Images)
Africa

Nigeria produces 2 million barrels of crude a day, according to the corporation’s website. Nigerians consume about 9 million liters (2.4 million gallons) of gas daily, almost all imported because local refineries are inefficient. One barrel of crude produces about 30 gallons of diesel or fuel.

A Chaotic Month in Africa: Nigeria Stumbles On as South Africa Stalls

A statement says the move follows a screening of previously used petroleum product importers that revealed most of the 44 companies were middleman businesses.

It said the change is “designed to enshrine transparency and eliminate the activities of middlemen.”