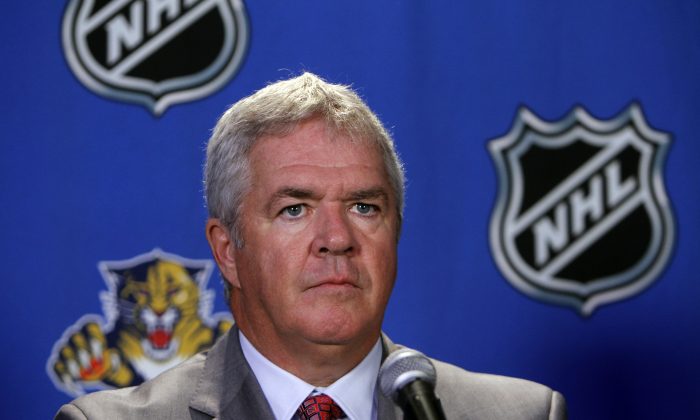 NHl rumors are flying ahead of the draft later this month, and include trade talks as well.

Let’s check out some of the latest ones.

For the Florida Panthers, goaltending is a very low priority in the upcoming draft. “They’re content to develop Gs Brittain and Cawley for now,” reported Harvey Fialkov of the Sun Sentinel via Twitter.

“Panthers need RWs and international prospects are top-heavy with them especially Nylander and Kapanen,” he added.

Fialkov also reported that the Panthers are compiling a draft wish-list after interviewing nearly 60 prospects at last week’s combine.

General Manager Dale Tallon has made it clear that they’re willing to trade the No. 1 pick if the deal is right.

“There was a lot of posturing, depending on the other organization’s plan of attack,” Luce said . “Some guys were tongue and cheek and some were very direct and blunt and say, ‘Is this for real?’ “That’s their way of trying to get information.”

“The list of our best available assets are put together separately from any trade scenarios or shopping of the pick,” Luce said. “In the end it all comes down to asset management. So we’ll listen to the offers and see if the right price does come along.”

“There’s no consensus No. 1 but there are probably six players who are significant players in this draft,” Luce added.

There are also teams that are aggressively pursuing trades with Buffalo, who has the No. 2 pick, sources told SportsNet.

“The going price to move up into those [first two] spots would be picks — a high first and a second or third — and an established player that helps your top two lines,” according to a scout aware of multiple offers for the picks.

As for Buffalo and GM Murray, writer Gare Joyce says:

“Time isn’t on any GM’s side, really, but he has more of it to play with than Tallon. Replacing Darcy Regier in mid-season, he has a season’s grace as well as the second, 31st and 39th overall picks in June. He also has the New York Islanders’ first-rounder in 2015 (not lottery-protected) from the Thomas Vanek trade and the St. Louis Blues’ first next year from the Ryan Miller-Steve Ott trade.

“Add to that nine picks in the first or second round in the last two drafts. With the Sabres’ own pick and the Islanders’ selection, Murray has what looks like two viable tickets in next year’s Connor McDavid-Jack Eichel derby, a stronger draft than this one. In fact, either McDavid or Eichel would likely be the first overall pick in this year’s draft if under-agers were eligible.

“Murray is listening to offers — if somehow he were able to convert his available assets (including his chip from the Blues) into two picks in the first 20 or better next month, he’d move on it. It will have to be a first-liner to get his attention if a prospective trade partner puts an established veteran in play.”

Chicago will be working on contract extensions for Jonathan Toews and Patrick Kane, but will also be looking to tweak the roster while taking stock of what they have.

Acquisitions Jeremy Morin and Joakim Norstrom, as well as Peter Regin, didn’t make much of an impact in the postseason.

Matt Cooke #24 of the Minnesota Wild controls the puck as Nick Leddy #8 and Jeremy Morin #11 of the Chicago Blackhawks look on during the first period in Game Four of the Second Round of the 2014 NHL Stanley Cup Playoffs on May 9, 2014 at Xcel Energy Center in St Paul, Minnesota. Hannah Foslien/Getty Images)

Meanwhile, Ben Smith, who earned a regular job, is a restricted free agent, and his agent hasn’t talked with the Hawks yet, reported the Sun Times. While Bollig and Kris Versteeg are locked up, Michal Handzus might retire.

“The Hawks need the next generation to step up this fall — Morin, Nordstrom, Teuvo Teravainen, maybe even Mark McNeill and Phillip Danault — and [Joel] Quenneville needs to give them a fair shot to make the Hawks a four-line team again,” said writer Mark Lazerus.

Detroit is in discussions on how to snag defenseman Matt Niskanen, who is coming off his best season with the Pittsburgh Penguins, reported MLive.

“Niskanen is young (27), mobile, moves the puck and can quarterback the power play. If he hits the market on July 1 he’ll be the most sought-after defenseman in a thin free-agent class,” it reported.

The team has plenty of salary cap space, being roughly $20 million under the projected ceiling of $71 million (though that’s before signing their restricted free agents).

However, Niskanen remains somewhat of a gamble and the Red Wings might not be willing to go as high as $6 million a year.

“My guess is someone else will spend more to get Niskanen – if he even leaves Pittsburgh,” MLive writer Ansar Khan said.

Speaking of Pittsburgh, the team is set to hire a general manager sometime this week, reported Inside Pittsburgh Sports.

Sources said that the team has started informing some candidates that they’re no longer under consideration.