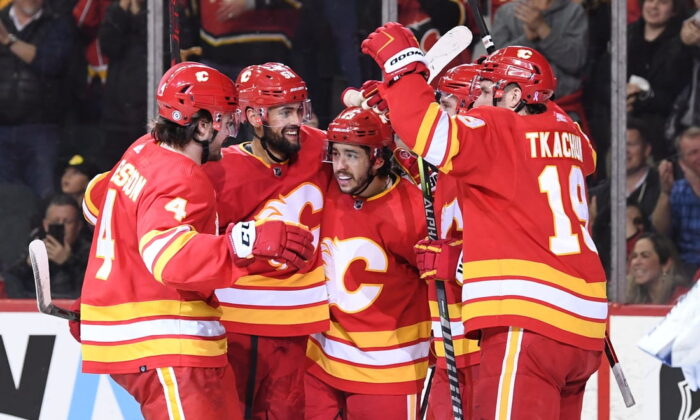 Johnny Gaudreau produced his first hat trick in three years and Jacob Markstrom made 30 saves as the Calgary Flames added another impressive victory to their collection, defeating the visiting Tampa Bay Lightning 4–1 on Thursday.

Mikael Backlund added a goal and Rasmus Andersson had two assists as the Flames improved to 15–2–1 since Jan. 29.

Calgary rebounded from a rare defeat Tuesday against the Washington Capitals and added a victory over the two-time defending champion Lightning to one over the league-leading Colorado Avalanche on Saturday.

Alex Killorn scored for the Lightning and goalie Andrei Vasilevskiy made 28 saves as Tampa Bay lost its second consecutive game. It is the first time the Lightning have dropped back-to-back games since a three-game losing streak Dec. 30–Jan. 2.

Hertl ended his five-game point drought with a goal and an assist. Alexander Barabanov and Brent Burns also had a goal and an assist apiece. Nick Bonino scored the Sharks’ other goal. Defenseman Erik Karlsson tallied two assists in his return to the ice, having missed the previous 15 games due to left forearm surgery. Rookie goalie Zach Sawchenko saved 33 of 36 shots for his first NHL win.

Trevor Moore had a goal and two assists for the Kings. Phillip Danault and Andreas Athanasiou each had a goal and an assist. Jonathan Quick finished with 26 saves.

The Panthers got four assists each from Jonathan Huberdeau and Aaron Ekblad as Florida won its fifth straight game. Huberdeau leads the NHL with 64 assists, a Panthers record. Anthony Duclair also scored for the Panthers. Sergei Bobrovsky made 34 saves.

Philadelphia, which had its two-game win streak broken, got goals from James van Riemsdyk, Cam Atkinson and Travis Konecny. Carter Hart made 31 saves.

Anders Lee posted his first career hat trick and Ilya Sorokin stopped all 25 shots he faced as host New York rolled to its most resounding victory at its new building at the expense of Columbus.

The shutout was the sixth of the season for Sorokin and the ninth of his career. Brock Nelson, Josh Bailey and Jean-Gabriel Pageau also scored for the Islanders, who had not scored more than four goals in any of their first 27 games at UBS Arena.

Goalie Joonas Korpisalo made 27 saves for the Blue Jackets, who have lost four straight (0–2–2). Columbus is 13 points behind the Washington Capitals in the race for the final wild-card spot in the Eastern Conference.

Josh Norris scored twice, including a power-play goal at 2:34 of overtime, as Ottawa defeated visiting Seattle.

Brady Tkachuk had a goal and an assist and Parker Kelly also scored for the Senators, who won their second in a row following a five-game skid. Goaltender Anton Forsberg made 30 saves.

Jared McCann, Ryan Donato and Mason Appleton scored for the Kraken, who rallied from a three-goal deficit in the final 11 minutes of regulation. Chris Driedger stopped 23 of 27 shots for Seattle, which suffered its fourth consecutive defeat and dropped to 1–9–2 in its past 12 games.

David Pastrnak’s second goal and third point of the game with 17.2 seconds left in regulation lifted Boston over visiting Chicago.

Taylor Hall slid the puck from the corner through traffic to set up Pastrnak in the slot for the game-winner. It was his team-leading 33rd goal of the season. The Bruins also got goals from Charlie Coyle and Jack Ahcan as they improved to 8–1–1 in their past 10 games. Jeremy Swayman made 22 saves to win his seventh consecutive start.

Brandon Hagel scored twice for Chicago, and Alex DeBrincat extended his goal-scoring streak to five games. In just his third start since returning from injury, Kevin Lankinen made 32 saves.

Ryan Strome and K’Andre Miller scored for the Rangers and Adam Fox had two assists. Goaltender Igor Shesterkin allowed four goals on 17 shots before Alexandar Georgiev replaced him 15 seconds in the second period.

Craig Anderson made 30 saves to become the sixth American goaltender to win 300 NHL games and also helped to spoil Jack Eichel’s much-anticipated return to Buffalo in the win over Vegas.

Anderson also became the 39th goalie in NHL history to hit the 300-win mark. Peyton Krebs and Alex Tuch, both obtained from Vegas in the trade for Eichel on Nov. 4, each scored a goal, and Victor Olofsson scored what proved to be the game-winner on a power play with 3:44 remaining.

Ben Hutton scored a goal, and Laurent Brossoit stopped 21 of 23 shots for the sputtering Golden Knights, who suffered their second straight loss. Vegas has just 24 goals over its past 12 games, including just four in its past three games.

Mats Zuccarello and Kevin Fiala scored during the shootout for the Wild, who earned their second consecutive win. Zuccarello also had a regulation goal.

Jakub Vrana scored two goals in his second game back from shoulder surgery for the Red Wings, who have lost four straight.

Jakob Chychrun scored his second goal of the game at 2:17 of overtime as Arizona won in Toronto.

The Maple Leads scored three straight goals in the first 8:17 of the third period to tie the game at 4 and force overtime. In OT, Chychrun scored his seventh goal of the season, from the left circle on a pass from Matias Maccelli.

Kyle Connor scored the go-ahead goal on a breakaway late in the second period to lift the Winnipeg over the New Jersey in Newark, New Jersey. Defenseman Brenden Dillon also scored a goal as the Jets won their second consecutive game and fourth in their past six.

Eric Comrie gave workhorse goaltender Connor Hellebuyck a breather and made 33 saves to win his fourth straight start. Comrie was victorious in his lone appearance while playing with the Devils last season.

Matt Duchene had two goals and an assist to lead Nashville past visiting Anaheim.

Filip Forsberg had a goal and two assists, Colton Sissons also scored, and Juuse Saros made 27 saves for the Predators, who have won five of seven following a four-game losing streak. Saros has allowed two goals in the three-game winning streak for Nashville.

Adam Henrique scored, and John Gibson made 26 saves for Anaheim in the second game of their five-game road trip. Gibson had been removed three times in eight starts since representing the Pacific Division in the All-Star Game on Feb. 5.

Ethan Bear scored his third goal of the season with 5:40 remaining as Carolina finally broke through to defeat Colorado in Raleigh, N.C.

Antti Raanta made 36 saves for his second shutout of the season and his 10th victory. Sebastian Aho added an empty-net goal with 1:32 to play.

The Avalanche lost consecutive games in regulation for the first time since October, when it dropped its second through fourth games of the season in regulation.