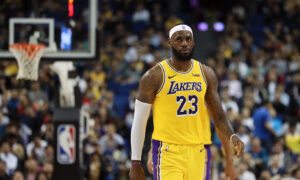 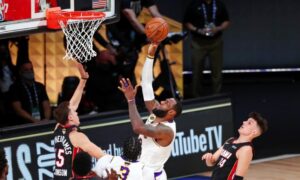 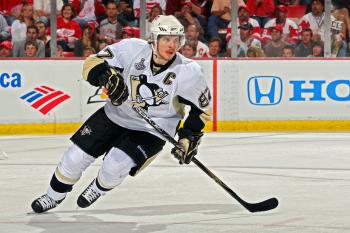 STILL GOING: Sidney Crosby is one reason the NHL playoffs have been a resounding success. (Jim McIsaac/Getty Images)
NBA

By Karl Yu
Print
Although Sports Illustrated opined “Why the NHL is hot and the NBA is not” on an issue cover back in June 1994, the NBA has pretty much been front and center in terms of media exposure while the NHL has taken a backseat in the U.S.

The end draws nigh for both leagues as the Detroit Red Wings battle the Pittsburgh Penguins in the Stanley Cup final while the Los Angeles Lakers and Orlando Magic face each other in the NBA final.

With both leagues’ playoffs occurring at the same time, one has to ask the question: Has the NHL been hotter than the NBA this time around?

The NHL showcased its two biggest stars in the second round when Sidney Crosby and the Penguins defeated Alexander Ovechkin and the Washington Capitals in seven games.

The NBA isn’t seeing the Kobe Bryant vs. LeBron James showdown as the Cleveland Cavaliers were eliminated from the playoffs this past Saturday, depriving the NBA of a dream match-up.

The best series of this year’s NBA playoffs was the opening round tilt between the defending champion Boston Celtics and the Chicago Bulls.

The Celtics and Bulls went the full seven games, with four games going into OT with two of them going into multiple overtimes—Game 6 was decided in three overtime periods.

Despite the fact that arguably the best player in the series—Boston’s Kevin Garnett—watched the entire series in civvies, the Celtics were able to prevail over guards Ben Gordon and 2009 NBA rookie of the year Derrick Rose, who put up a good fight.

Everybody loves to see a team make that proverbial jump from the outhouse to the penthouse and the NHL and NBA both saw such teams this postseason. Cinderella teams pulling off big upsets are another intriguing aspect of the playoffs, after all.

Going into the playoffs, the Carolina Hurricanes were the East’s sixth seed but they caught fire and eliminated the third-ranked New Jersey Devils and top-seeded Boston Bruins.

Their miraculous run was ended by the Pens in the Eastern Conference finals.

Chauncey Billups returned home when the Detroit Pistons packaged him and traded him to the Denver Nuggets in the Allen Iverson deal. The deal hasn’t worked out so well for the Pistons.

The Cleveland Cavaliers swept the Pistons in the first round, while Billups led the Nuggets to 4–1 series wins over the New Orleans Hornets and the Dallas Mavericks before succumbing to the L.A. Lakers in the Western Conference final 4–2.

Although Denver has made the playoffs for six straight seasons, it has never advanced past the first round prior to Billups’s arrival.

In fact, the Pepsi Center is so used to early playoff exits, it double-booked Game 4 of the Western Conference final with a WWE Monday Night RAW event.

“Rating” the NHL and NBA Playoffs


All the great hoops action has not gone unnoticed.

Meanwhile, the NHL hasn’t done well on the ratings front with NBC.

Speculation is that the people at the peacock network didn’t want to risk a game going into triple OT on Conan O’Brien’s Tonight Show debut on Monday and therefore pushed to have Games 1 and 2 on back-to-back nights (Saturday and Sunday).

However, there was a ratings increase between the first and second games of the Stanley Cup final.

Both have had great postseasons but the NHL wins out for sportsmanship.

After a humiliating loss in Game 7, Ovechkin still found time to shake Crosby’s hand after the game while LeBron James exited the court without saying a word to anyone following his team’s elimination.

Image is everything and the NHL’s two stars shone brightly while one of the NBA’s brightest didn’t.
TOP NEWS