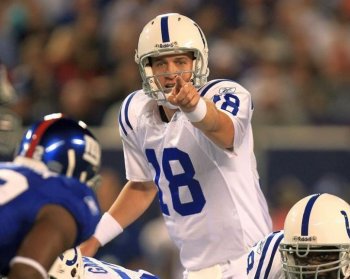 Peyton Manning will be ready for the Giants this Sunday night. (Travis Lindquist/Getty Images)
NFL

Picks for this weekend’s first-round of NFL playoff action are listed below. With one exception, all the teams in the first round finished the regular season on a roll, making these picks tough.

Strategy: When everyone is operating at peak efficiency and emotional intensity, look at the stats. Sift the numbers in the team’s season-long performances in order to find the edge that makes the difference between the survivors and the one-and-done teams.

Look for only one home team to capitalize on that advantage this week.

Despite the huge difference in records, this will be closer than everyone thinks. The Colts ran the table over their last nine games, but most of those victories were close, including a 3-point decision over the Chargers in San Diego on Nov. 23. The Chargers had their own streak of four wins at the end to overtake Denver for the division flag. The Chargers were 6–0 in games decided by 10 or more points, and their eight losses were by an average of only four per game. But the key stat is Indy’s solid 6–2 road record. Pick: INDIANAPOLIS

Two more teams that closed the season strong— Baltimore winning five of six, and Miami its last five. Miami has an edge in turnover ratio (+17 to +13), but the Ravens’ huge advantage in net points scored (+141 vs. +28) and their 9–2 record in games decided by 10 or more means there could be a repeat of the Ravens’ 27–13 win on Oct. 19 in Miami. Pick: BALTIMORE

Arizona racked up a 6–0 record against divisional opponents in the NFC West—the league’s weakest division. Their only two wins in their last six were against the division. Atlanta, on the other hand, finished strong with five wins in their last six, and were +66 in net points vs. only +1 for the Cardinals. Injuries on the defensive line and a -3 turnover ratio are warning signs for the Falcons, but the Cards’ boom & bust offense is a likely bust Saturday. Pick: ATLANTA

Both teams finished strong, with the Eagles taking four of five and the Vikings five of six. The Eagles’ big edge in net points scored, +127 vs. +46 for the Vikings, is offset by their losing record on the road (3–4–1). Alone among the teams in action this week, the Vikings had a mid-season QB change, which bears a look. Tarvaris Jackson began the season as the starter, was benched, then took over again due to injury in Game 13. If he can continue to hold down the interceptions (only two on the season), the home team should squeak by. Pick: VIKINGS