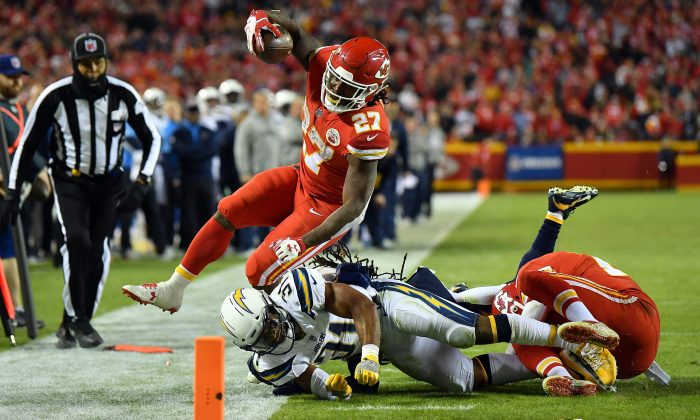 Running back Kareem Hunt #27 of the Kansas City Chiefs carries the ball as free safety Adrian Phillips #31 of the Los Angeles Chargers knocks him out-of-bounds before reaching the endzone during the game at Arrowhead Stadium in Kansas City, Missouri, on Dec. 16, 2017. (Peter Aiken/Getty Images)
US News

The Kansas City Chiefs cut running back Kareem Hunt from the team on Friday, Nov. 30, after a video surfaced that showed the NFL’s reigning rushing champion knocking over and kicking a woman in a Cleveland hotel hallway in February.

“The video released today confirms that fact. We are releasing Kareem immediately,” the Chiefs said in a statement.

The Chiefs also said that several members of the management team spoke with Hunt after becoming aware of the incident, and they said the player was “not truthful.”

The following is the full statement from the Chiefs:

Earlier this year, we were made aware of an incident involving running back Kareem Hunt. At that time, the National Football League and law enforcement initiated investigations into the issue. As part of our internal discussions with Kareem, several members of our management team spoke directly to him. Kareem was not truthful in those discussions. The video released today confirms that fact. We are releasing Kareem immediately.
— The Kansas City Chiefs

The decision came shortly after the NFL suspended Hunt by putting him on its Commissioner Exemption List.

“The NFL has placed Kareem Hunt of the Kansas City Chiefs on the Commissioner Exempt list, and as a result, he may not practice, play or attend games. The NFL’s investigation, which began immediately following the incident in February, will include a review of the new information that was made public today,” the NFL wrote in a statement.

The former Kansas City Chiefs running back was filmed kicking and pushing a woman in a video obtained by TMZ.

Hunt pushed the 19-year-old woman at the Metropolitan at The 9 hotel in Cleveland, Ohio, in a February 2018 incident, TMZ Sports reported.

In the video, someone can be seen trying to restrain Hunt, who weighs 200 pounds, before the woman hits him in the face, sending him into a fit of rage. The Chiefs star then later turns a corner and runs into a man, who hits the woman, sending both to the floor.

Hunt then kicks the woman in the leg, the video shows.

The police were called to the scene during the Feb. 10 incident, but no charges were filed.

In a statement obtained by ESPN, Hunt apologized for his actions.

“I deeply regret what I did. I hope to move on from this,“ he said.

TMZ Sports didn’t name the woman in their report.

However, a 19-year-old woman named Abigail Ottinger has alleged that Hunt has assaulted her around 3:45 a.m. on Saturday, Feb. 10, at the Metropolitan Hotel.

Cleveland police spokeswoman Jennifer Ciaccia told cleveland.com that the incident appears to be a cross-complaint, which means each person would be directed to the prosecutor’s office if they wanted to pursue charges.

It’s unclear if Ottinger was the woman in the video.

The Associated Press and Jack Phillips from the Epoch Times contributed to the report.